All posts by Chakor Channing

MLG Neo-Futurist wrote: I checked it and it seems to be an acceptable custom. Do you want me to restore it?

Since I'm not exactly "friends" with the Wikia staff anymore and have retired from writing fan fiction as well as customs, I think we can just keep the page deleted. But I do appreciate the offer.  :-)

I see what you mean now... Here is the image I found. 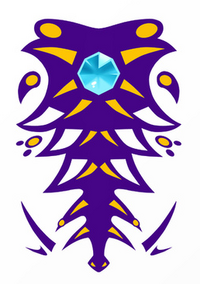 Leozinhodeccel wrote: Send me this pythor Belly adhesive that was done by you please

I didn't make a custom decal for the Minifigure if that's what you're asking. If you're asking to buy my Minifigures, I don't sell anything in my videos unless I say so in the video, which I didn't. Not for sale.

As many of you are probably aware, the LEGO Jurassic World theme sets were sold out the week they were released (and possibly even sooner). With these being officially licensed sets, they were already slightly overpriced from LEGO (as is the case with the Marvel sets). However, I can't say that I've ever seen prices this high on LEGO sets on the secondary market so soon after their release. Older themes like POTC go for crazy prices now, but that's because they are older and more valued. With the Jurassic World sets, it seems as though scalpers immediately knew they were a gold mine.

While it comes to me as no surprise that scalpers will charge ridiculous prices on these sets, what's more surprising is that people will actually pay these prices. While the Indominus Rex Breakout set generally goes for about $200 on the secondary market, the image below may surprise you. Not the price, but the amount that has been sold for that price...

Now why pay the price of a house for this set when these people could just as easily buy one from hundreds of $200 buy-it-now listings? The sets themselves are by no means this rare, but finding them for a decent price IS. The image above has not been edited in any way other than blurring out the seller's ID and the location, but is truly unbelievable. BTW: the listing was up back in August, but I have not seen it on eBay since.

I did a video review and comparison of both Minifigures. See it here!  ;-)

It shouldn't be. LEGO is, thankfully, using the same molded pieces of the 2012 Pythor for the 2015 Pythor. I'm going to do a review and comparison of 2012 original Pythor and 2015 white Pythor tomorrow and post it on my YouTube channel. https://www.youtube.com/chakorchanning/videos

Even if Pythor was on their side, the garbs wouldn't protect him at all. It's not really armor.  ;-)

As some of you are probably already aware, LEGO has changed more than Pythor's skin color with their new Minifigure. Obviously he's supposed to have his purple replaced with white and his black replaced with purple, and aside from the obvious Anacondrai Cultist belt/armor they gave his torso print (which doesn't make a whole lot of sense since Pythor isn't on their side in the show), LEGO has made subtle differences in the shape of his neck and tail print decals.

These differences include the change in shape, as I mentioned before, and also the lack of the gold markings his original Minifigure had. Even worse is that they make Pythor look like this in the show for the season with the Anacondrai Cultists and everything. Although in Rebooted, Pythor looked like a recolored version of his original CGI model, as he still had the gold markings and everything.

I don't know if it's just me, but does anyone else want LEGO to make a version that's just a recolor of his original print decals? I know this is sort of asking a lot of them since they've already given us a white Pythor Minifigure. But that's just it: they can say they gave us a white Pythor already, despite changing the print decal shape and taking away the gold markings for no reason. After all, the only thing that the venom/acid of the Great Devourer did was bleach Pythor white. Unless the shrinking pill he swallowed in Rebooted changed his skin pattern shape, which is likely the excuse someone would give us, there's no reason for it to be changed.

Below is my digitally rendered image of what I think the new Pythor Minifigure should have looked like. Although there are still changes in the shape and gold/yellow markings in places where they don't belong, you get the idea: LEGO should have just recolored the original print images/decals. 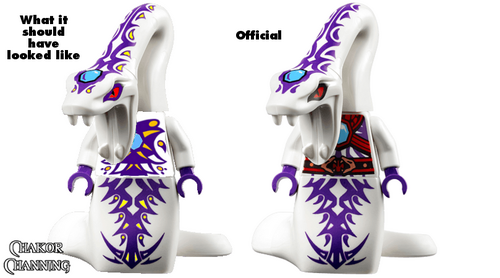