Build with Chrome, or Build (stylized as build), was a web application that allows users to explore and build a world of digital LEGO creations. A collaboration between Google Chrome and The LEGO Group, Build with Chrome was originally developed by a team of Google Australia developers for the LEGO Festival of Play. In January 2014, the Google Chrome team opened up Build with Chrome to everyone and added features such as the ability to sign in with a Google Plus account to help you find builds that people in your circles have created, a new categorization system for completed builds, and Build Academy. It was discontinued in March 2019.

Build. A partnership between Google Chrome and LEGO®

Welcome to Build - the largest LEGO® set the world has ever seen. Developed with the latest web technology in Chrome, Build is a place for everyone to imagine, create and explore building with LEGO bricks online. Choose to build on any plot in the world across your laptop, phone, or tablet. Once you’ve created something, publish it on the map, and share it with your friends. If you’d like to train to become a great Master Builder, visit the Build Academy. Complete a series of exciting challenges over different locations and you can unlock cool new Lego bricks along the way. Plus, you’ll meet loads of characters from The LEGO® Movie!

The World of Build

The World of Build is the Google Map of the world that Build with Chrome users can explore and build on using virtual LEGO bricks. The user can search the map for a spot to build using the search bar. Popular builds, the user's builds, builds that people in the user's circles have created, and builds that have been +1'd by the user can be looked through at the bottom of the page. On the map, red dots represent 2D builds, yellow dots represent character builds, green dots represent random builds, blue dots represent buildings, and purple dots represent vehicles. The user can allow Build with Chrome to access his/her computer's location and easily get to the location on the map using the "Show my location" button. If the map is zoomed in far enough, the map will transform into LEGO bricks and the user will be able to view the LEGO builds on the map. Here, the "Show my location" button will turn into dial controls that allow the user to rotate the map in order to see different sides of the LEGO creations. Clicking on any plot will bring up the option to build on it, unless it is a Work Zone (meaning someone is building there). Clicking on the "Build" button at the top-right corner will find the user a nearby plot to build on. Clicking on a finished build will bring up creator info, date created, area built, a report build button, +1 build button, and a link button.

Once a location has been set, the user will be able to build using virtual LEGO bricks with the Builder tool. The baseplate is a LEGO version of the spot you picked to build. For example, if you picked a spot over a body of water, your baseplate would be blue.

The baseplate used in Build with Chrome.

Parts under the 'LEGO® Bricks' tab in Build with Chrome.

Parts under the 'Extras' tab in Build with Chrome.

In Build with Chrome, Theme Areas are areas on the World of Build that use a different set of brick colours. The colour that is selected upon loading the Builder is always the second colour in the theme.I dont know how to add more columns so ill just say that the galactic area is in the Yucatan peninsula in mexico

This is not complete. Please help improve this page by adding Theme Areas you discover.

Baseplate colours/designs vary based on the location. See The World of Build.

Build Academy is a series of short tutorials/challenges featuring characters and structures/builds from The LEGO Movie. Users can save their progress by signing in to Build with Chrome with a Google Plus account. Upon completing a challenge, the user can share that he/she has completed the challenge by clicking the "Share" button.

Then, paste the link into your web browser. Replace "X_Y" with the level you want to skip to (see Challenges). Go to the site and click "Start".

Note - This cheat is no longer working. When attempted, the following message will be displayed: "Looks like you didn't finish all challenges. Or did you forget to log in?"

Then, paste the link into your web browser and go to the site. 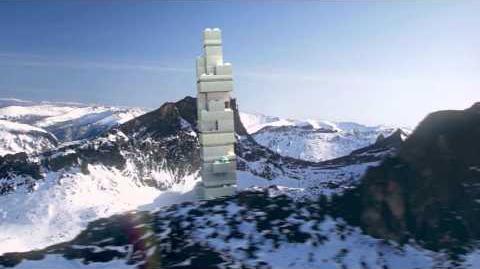 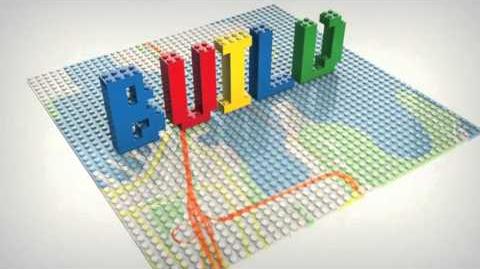 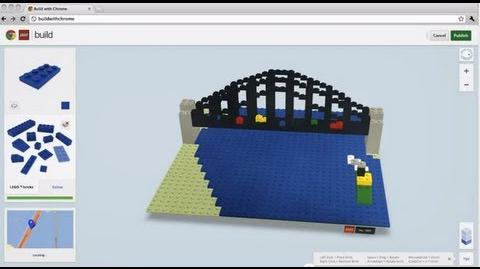 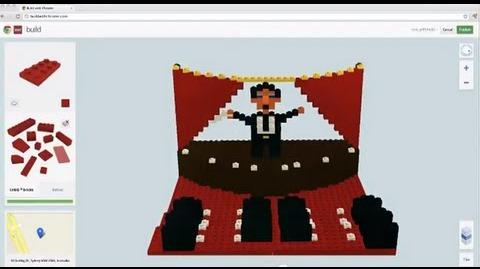 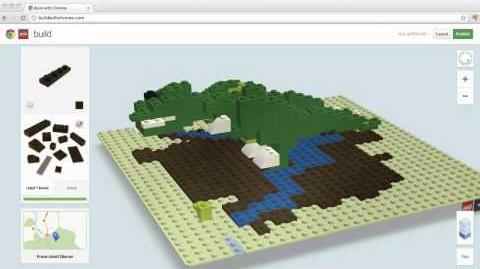 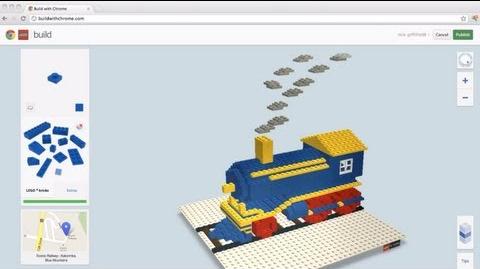 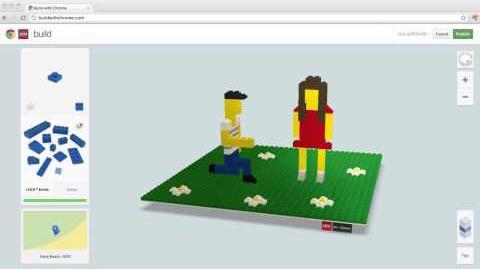 What will you build? Where will you build? Welcome to the largest LEGO® set the world has ever seen. We hope you have lots of fun building with LEGO bricks in Google Chrome. Build with Chrome is a place to imagine, create and explore. Please play by the house rules, so that we keep Build great for everyone.

• Be original. Your build must be from your own work. Don't infringe on the intellectual property rights of others, including patent, trademark, trade secret, copyright, and other proprietary rights. We will respond to clear notices of alleged copyright infringement.

• Be nice. Don't create builds to offend or shock others. Depictions of anything gratuitous or violent is not allowed. Builds should not contain materials that threaten, harass or bully other users.

• Play safe. Don't give out personal details. We don't allow unauthorized publishing of people's private and confidential information, such as credit card numbers, Social Security numbers, driver's and other license numbers, or any other information that is not publicly accessible.

• Build, don't write. Build with Chrome is for creative builds, not text submissions. If you submit text in your build, we reserve the right to remove it.

• Don't preach. Don't promote religious or political ideologies. We don't allow the promotion of hatred toward groups of people based on their race or ethnic origin, religion, disability, gender, age, veteran status, or sexual orientation/gender identity.

• Keep it clean. Don't build anything that's inappropriate. We don't allow builds that contains nudity, graphic sex acts, or sexually explicit material. Google has a zero-tolerance policy against child sexual abuse imagery. If we become aware of builds with child sexual abuse imagery, we will report it to the appropriate authorities and delete the Google Accounts of those involved with the distribution.

• Have fun. Express your creativity and free your imagination!

Q: Who can use Build with Chrome?

A: Everyone can enjoy exploring and building with Build. If you are under the age of 18, you need to first obtain your parent or guardian's consent before you publish any creations on Build.

Q: Who has the right to a particular piece of land?

A: Land is allocated on a first come, first served basis - the first user to choose a site and start building gets to nab that site.

Q: Can I save my build while working on it?

A: Builds are only saved once published. Work in progress is not saved.

Q: Can I go back after publishing and change my build?

A: No, once your build is published you can't add to it or change it.

Q: Who will see my build?

A: After your build is published it will be publicly viewable and may be featured in promotional material by Google and the LEGO Group. Your build may be used, reproduced, modified, published and communicated for any purpose, including in promotional materials by Google and the LEGO Group, on a royalty-free, perpetual basis. You consent to any act of omission that would otherwise infringe moral rights in respect of a build and waive all moral rights in respect to any build you publish on the Build site.

Q: What information do I need to provide to use Build with Chrome?

A: You can explore the site and play Build Academy without providing any information. To publish a build you need to sign in with your Google+ account.

Q. How will you use my Google+ profile information?

A: To the extent that Google collects your information, we will use such information for purposes of moderating and adding personalized features to the Build site, and in accordance with Google’s Privacy Policy. Your personal information will not be shared or used in any other way.

Q: How can I make sure my build isn't removed?

A: Your published build will go through a moderation process and may be removed, without notice, if the LEGO Group determines, in its sole discretion, that any build violates the rules and guidelines set forth in these Additional Terms, or is otherwise inappropriate. You may also be blocked from submitting any further builds. To prevent your build from being removed, please keep the following guidelines in mind:

• Don't give out personal details of any kind, including but not limited to phone numbers, email addresses, physical addresses, or any other contact information.

• Don't swear or post anything that could offend, alienate or negatively incite others.

• Builds must only be made wholly for personal, non-commercial purposes.

• Don't advertise, promote or campaign for any products or services of any kind.

• Don't submit anything that is hateful, threatening, racist or pornographic; that is related to alcohol, drugs, tobacco or medicines; that incites violence or encourages criminal conduct; that contains nudity; that contains extreme or gratuitous violence; that is offensive, unlawful, or of an indecent, obscene or menacing nature; or that would otherwise be deemed by a reasonable person in similar circumstances to be inappropriate for children or adults.

• Don't submit a build that may be defamatory of or derogatory to any third party or would be detrimental to the Google or LEGO brand.

• Use of the LEGO bricks or any other intellectual property from Build is not permitted outside of the site.

You indemnify Google and the LEGO Group against any claim that the build, or the use of a build, infringes the intellectual property rights of any third party, is misleading or deceptive, or is likely to mislead or deceive, is defamatory, or is in breach of any other relevant law or regulation in the country in which you reside.

Q: What do I do if I see something that is in violation with these Additional Terms?

Q: What happens if I breach these terms and conditions?

A: Without limiting any other rights of Google or the LEGO Group, your build will be removed, and you may be prevented from uploading any further builds.

Q. Will Build always be available?

A. Build may be discontinued at any time in the future for any reason without notice and neither Google nor the LEGO Group will be liable for any loss or damage whatsoever which is suffered (including but not limited to indirect or consequential loss) in connection with your participation in Build.

Q: What can I do if Build isn't working properly?

A: Build was developed to show the latest web technology in browsers like Chrome. We recommend using Chrome as it can handle the graphics required.

Q: How can I give feedback on Build?

A: We'd love your feedback. If you come across an issue while using Build in the recommended Google Chrome browser please let us know at feedback@buildwithchrome.com. The LEGO Group can be contacted at www.lego.com and any contact you have is subject to LEGO’s applicable terms and conditions.. Google and the LEGO Group are severally liable.

Retrieved from "https://brickipedia.fandom.com/wiki/Build_with_Chrome?oldid=1942018"
Community content is available under CC-BY-SA unless otherwise noted.