“Where are my Pants?” Guy

"Where are my Pants?" Guy, AKA Larry, is a minifigure who appears in 71004 The LEGO Movie Series and one of the characters in the 2014 film, The LEGO Movie. He is voiced by Craig Berry according to the audio commentary for The LEGO Movie (though he was listed in the credits as Blake).

The "Where are my Pants?" Guy is the star of a popular Octan Studios TV show called "Where are my Pants?", which is the favorite show of Emmet as well as almost every other citizen of Bricksburg. Lord Business uses the show to distract Emmet and the others in order for him to carry out his scheme of gluing the world together undisturbed. His name is Larry, (At least, the character he portrays in his show is named Larry. It is unsure if it is his real name) but in The LEGO Movie: Junior Novel, he is named Blake (which is what he is listed as in the credits). Sharon Shoehorn is his wife in the show. It is unclear if they are actually married, or just acting for the show.

In The LEGO Movie, this actor is the star of "Where are my Pants" which is a favorite show of Emmet and everyone that lives in Bricksburg.

In the real world, "The Man Upstairs" is seen using glue to glue his pants on. 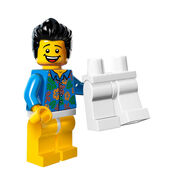 The "Where are my Pants?" Guy as seen in The LEGO Movie 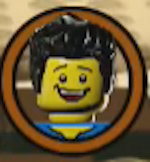 Retrieved from "https://brickipedia.fandom.com/wiki/%22Where_are_my_Pants%3F%22_Guy?oldid=1990161"
Community content is available under CC-BY-SA unless otherwise noted.
... more about ""Where are my Pants?" Guy"
RDF feed
Accessories
White Pants +
Appearances
71004 The LEGO Movie Series
The LEGO Movie +
ArticleRating
3 +
Image
70840 (23).jpg +
Img1
Where_are_my_Pants_Guy..jpg +
Img2
70840 (23).jpg +
InfoboxTemplate
Minifigure +
ShopDescription
“Honey, where are my pants?” The “Where A … “Honey, where are my pants?”</br></br>The “Where Are My Pants?” Guy is the star of the #1 hit television show “Where Are My Pants?”, written, filmed, and broadcast by the Octan Studios subsidiary of President Business’s personal mega-corporation.</br></br>Every night, the citizens of Bricksburg tune in to watch the show and laugh at the crazy situations that this pantsless fellow finds himself in, and every morning, they all gather at their office water coolers to chat about their favorite moments from the latest episode. Little do they know that the show is slowly sapping their creativity and imagination – just like President Business wants!tion – just like President Business wants! +
Theme
The LEGO Movie +
Title
“Where are my Pants?” Guy +
Txt1
The LEGO Movie +
Txt2
Apocalyptic +
Years
2014 +