Brickipedia
Register
Don't have an account?
Sign In
Advertisement
in: Class 4 articles, Sets listed for ages 8+, Castle,
and 4 more

The 10039 Black Flacon's Fortress is a Castle set released in 2002. The set contains a small castle with knights and guards containing 426 pieces, as a part of the Black Falcons faction.

This set was a Legends re-release of the 1986 set, the 6074 Black Falcon's Fortress. There are some differences between the original and re-release, such as the small Black Falcons flag, and the horse saddles in the re-release have two weapon clips in contrast to the original saddles that only had one clip. 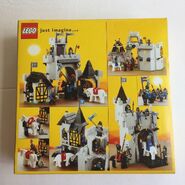