10184 Town Plan is a Town set released in 2008. The set is made to resemble a normal LEGO town in the 1950s. An exclusive letter from the LEGO Company owner (Kjeld Kirk Kristiansen) is also included, and he is depicted on the box playing with this set. The set also contains eight minifigures and two vehicles. Also featured with this set are three exclusive 2x2 gold bricks that cannot be obtained in any other set. They are included to celebrate the 50th year anniversary of the LEGO brick. It's recommended for ages 12+. 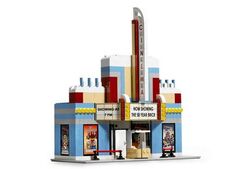 This set is made to resemble a normal town in the year 1950.

The Town set includes five points of interest being: a movie theatre, a town hall, a service station, a fountain, and two vehicles. Included also are eight minifigures made to look like they are from the 1950's. 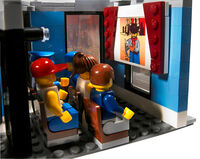 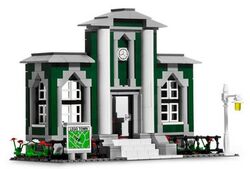 The second point of interest is the Town Hall. The Town Hall is a large dark green building, made of three main parts. At the bottom of a middle part was a staircase going up to a transparent door. Above the door was a clock. On the two sides of the door were two white columns, and on both sides of the clock were two smaller white columns. The two other main points of the city hall were identical: Both had many white windows and but not as tall as the middle part. On the bottom were gardens, filled with flowers, protected by a black fence encircling it. On the far right of the set was a street lamp. On the far left was a city map, with a red point on the map. All three parts of the building had grey roofs.

On the inside of the town hall was plants and a ceremonial stage for weddings. 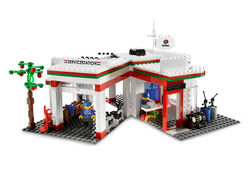 There is also a service station in the corner. The Service Station was made of two main parts, both connected by a folding brick. Both buildings were basically rectangular grey base plates with a rectangular roofs. The roof were held up by four pillars placed at each corner of the rectangular base plate. Both were mostly white, with a bit of green and red. This meaning that this is an Octan service station. Inside the first part was filled with areas to hold tools, including a box and a tool holder. The second part had a door, leading into an office were a man sits at his desk. Under the desk there is a yellow banana and a green apple. A tree is standing on the side of the building.

The fourth point of interest is a fountain. The base is green, and blue coloured bricks are encircled by grey bricks. Two benches are standing on the opposite sides. In the centre of the fountain there is three special edition gold bricks that are exclusive to this set.

The last point of interest are two vehicles. One vehicle is a blue car and the other a red tanker. The blue car is used as the honeymoon car for the bride and groom while the red tanker is used for delivering fuel for the petrol station.

Eight exclusive minifigures came with this set. Although none of them were specifically named. This set includes a married groom, a married woman, one man pedestrian, one woman chef, a theatre reception man, and three service station workers.

The Groom comes with a classic black top hat. He also comes with the classic yellow head piece with a shy grin on it. The torso he comes with has tuxedo printing and for his legs they are solid black.

The Bride has a classic hair piece in a pony tail position. Her head piece comes with a smile but it is not a normal classic one. THis one has eyebrows in an upright position and lip balm underneath the mouth. Her torso has flowers printed on it and she comes with a sloped brick piece instead of a normal leg piece stimulating a dress instead. 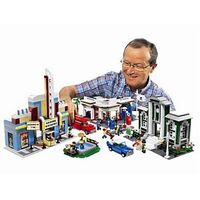 The set was released in the City Theme, under the Town Essentials subtheme. The box design was one similar to 10185 Green Grocer and 10182 Café Corner. Kjeld Kirk Kristiansen, grandson of the founder of the LEGO Company and now owner of the company, is featured on the front cover who was also featured on the cover of the set, just like he was featured on a set with the same name fifty years earlier, as a child.

The set contained 1,981 bricks included a letter written and signed by the company owner Kjeld Kirk Kristiansen. The set was valued at $149.99 USD, $262.62 AUD, and $159.99 EUD and was intended for people ages twelve and older. The set was released under the City Theme, under the Town Essentials subtheme, in 2008.

An early prototype of the Town Hall

The back of this prototype

A second prototype of the town hall

The side of this prototype 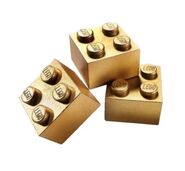 The exclusive gold bricks that come with the set. 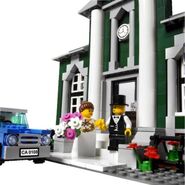