Market Street consists of two main parts. The first is the market place which has two fruit stalls and a double gate. The second part of the set is the four story town house. The bottom floor is a basement with a small flight of steps leading up. The ground floor is entered through a small rounded flight of stairs from the pavement also there is a canopy and a sign with a croissant attached to it, both on the buildings exterior. The first floor is made of light blue bricks with some beige sections, there are two small canopies on the two windows overlooking the street along with a balcony accessible through a clear door and another sign which is blank. The second floor and last floor is made up of the same light blue brick as the previous floor, a lion carving piece overlooks another balcony on this floor, a small roof top opening is also on the top floor with a single potted plant, this upper floor is also counted as the roof as it is pyramid shaped so there is little roof space with just a small chimney. 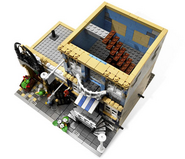 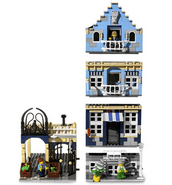 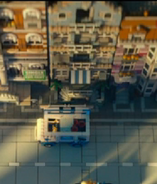 Movie cameo
Add a photo to this gallery