10199 Winter Toy Shop is a LEGO Shop Seasonal Town Exclusives set released in 2009. It contains a toy shop, a large Christmas tree, a park bench with a street lamp, a snowman, and seven minifigures, with a total of 815 pieces.

The toy shop has a counter and an open fireplace on the ground floor as well as several toys behind the shop windows, comprising microscale models of a steam locomotive and a robot. The top floor contains a small workshop in the tower, which has a small microscale toy car on a table and is lit by a 2x3 lightbrick attached to the ceiling. 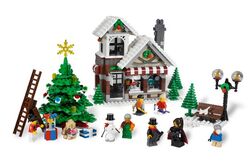 The Christmas tree has a large transparent yellow star on its top. Beside the tree is a ladder to recreate a Christmas decoration scene. Under the tree are several toys/presents. The jack-in-the-box has the jester hat from Castle, but is not operable since the head is fixed. There is a teddy bear that is brick-built instead of consisting of one single element. And finally there is one small wrapped Christmas gift box.

It has a clock and stone frog inside.The frog is sitting right above the clock.

The snowman has a top hat and antenna/lever pieces as arms. The street lamp has two transparent globe pieces.

Among the seven minifigures are a toy maker, two Christmas singers, a black haired woman, and three children (with short legs). The toy maker has grey hair and wears green dungarees, just like the City farmers from 2009. The two Christmas singers are dressed in black, the male one wears a top hat and a red scarf and the female one wears a dress and a cloth cape, each singer carries a song book. Two of the children, a boy and a girl, wear skis and also have ski poles. The other child wears a helmet. The set also includes several white 1x1 rounds representing snowballs, and a white crouching cat.

Retrieved from "https://brickipedia.fandom.com/wiki/10199_Winter_Toy_Shop?oldid=1968394"
Community content is available under CC-BY-SA unless otherwise noted.