10202 Ultimate Dume is a BIONICLE combiner model that was released in 2004. The set includes 555 pieces, 8621 Turaga Dume and Nivawk, 8622 Nidhiki and 8623 Krekka, which can be combined to create "Ultimate Dume". The set is intended for children aged nine and up.

The set is based on Makuta Teridax's appearance in BIONICLE 2: Legends of Metru Nui after he absorbed the bodies of Nivawk, Nidhiki, and Krekka. 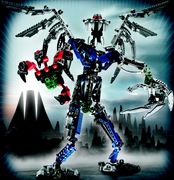 Front of the Box 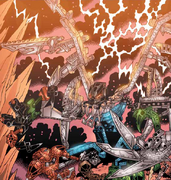 Bottom of the Kraahkan.