Voporak was once a member of Sidorak's species and a clan leader on the island of Stelt. Seeking to usurp his position of power, Sidorak encouraged the Makuta of Stelt to select him for experimental mutation. By combining Energized Protodermis, Roodaka's mutation Rhotuka, and other mutagenic substances, they transformed Voporak into a being sensitive to shifts in time, one that would be able to locate the Kanohi Vahi if it ever came into existence. The Makuta of Stelt lent this being to the Dark Hunters to learn discipline, but Voporak became loyal to the Hunters rather than the Brotherhood as a result.

Voporak sensed the power of the Vahi when Vakama used it in his fight against Teridax, and traveled to Metru Nui in search of the Mask of Time. Arriving in the city, Voporak made his way to the coastal gates, where he discovered Vakama, who was in possession of the mask. Voporak claimed the mask for himself, and left the unconscious Vakama. The Shadowed One, leader of the Dark Hunters, had also arrived in the city, seeking information on the whereabouts of his operatives, Nidhiki and Krekka. Voporak presented him with the Vahi, and was ordered to remain in the city. While waiting in Po-Metru, he was confronted by a massive army of Rahkshi, commanded by Teridax as a diversion. The Rahkshi threw themselves at Voporak, disintegrating upon contact with the temporal field surrounding his body. Voporak later returned to the Shadowed One, who engaged in a fight with Teridax. In the course of the battle, Teridax disabled Voporak by suffocating him with a vacuum, rendering him unconscious. He then threw the Shadowed One into Voporak, causing the leader of the Dark Hunters to age 3,000 years in seconds.

Voporak survived the attack, and 1000 years later traveled to the island of Mata Nui after Tahu Nuva used the Vahi there. He was paired with Ancient on his search, though Ancient later returned to Odina upon learning that the Vahi was in Metru Nui with Vakama.

After some time, Voporak departed to Metru Nui, where he stole the Kanohi Vahi from a protected chamber in the Coliseum, incapacitating a group of armed Ta-Matoran and a four-armed Order of Mata Nui member protecting the city. He then left the city via a hole he created in one of the city's walls.

Voporak has non-Elemental based Time powers. He can give off a temporal force field that ages anything thrown at him and can more quickly age objects through touch, though this power does not work on the Mask of Time itself. Voporak is also sensitive to fluctuations in the fabric of time, allowing him to sense the use of and track the Kanohi Vahi. His Rhotuka has the ability to distort an opponents sense of time, knocking their perception of time backwards by several seconds.

Voporak is extremely loyal to the Shadowed One, and is willing to go to great lengths to impress his master.

Voporak carries an artificial Rhotuka Launcher with which he launches his Rhotuka. He also carries two large, bladed weapons. 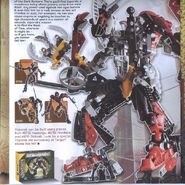