The main focus of the set is the Kardas Dragon. It is extremely posable, as it has joints at the knees, hip area, arms and hands, neck, and all along the tail. Vezon (or any other standard-sized BIONICLE figure) can ride on its back. The other figure included in this set, Vezon, is equipped with a shield and a different variation of of the Spear of Fusion. Aside from this, however, he is identical to his appearance in 8764. Vezon's distinctive features are his two-sided mask and his cape.

Vezon, the "seventh Piraka," became a guardian of the Kanohi Ignika, the Legendary Mask of Life, upon discovering the secret staircase leading to the chamber where the mask was. He stayed in this chamber for several weeks until the other Piraka came, searching for the Ignika.

During the battle with the Toa Inika, Vezon urged Fenrakk into the lava, leading to their "resurrection" as the more powerful Vezon and Kardas. Despite this, however, they were defeated by the Toa, allowing Matoro to remove the Ignika from Vezon's head.

The Kardas Dragon was a powerful fire-breathing dragon with wings, a large tail and powerful jaws to help it overwhelm the Toa. It was created by the Ignika when Vezon and Fenrakk fell into molten lava during their fight with the Toa Inika.

The battle that followed was fierce, but eventually tipped in Vezon and Kardas' favor. Just before the final blow could be dealt, Jaller ordered Kongu to use his Mask of Telepathy to reveal the Ignika's true feelings to Vezon. While the seventh Piraka was distracted, Jaller launched a Zamor he received from Axonn, freezing Kardas and his rider in a stasis field, allowing Matoro to take the Mask of Life, separating Vezon from Kardas in the process. When the rest of the Piraka confronted the Inika, the Kanohi made Kardas fire one last blast at Matoro, causing him to lose his grip on the mask. It then flew to the island surface and plunged into the sea.

Freed from the Ignika's powers, Kardas and Vezon went different ways, Kardas eventually making his way to the surface of Voya Nui, and later, the island of Mata Nui.

The Kardas Dragon constantly generates a concussive force inside of himself and then releases it. If he does not release the energy, it would be forced out as an explosion that would kill him.

Although Kardas was fused to Vezon, he did not share the same kinetic absorption ability as Vezon, unlike when it was Fenrakk.

Kardas on its own 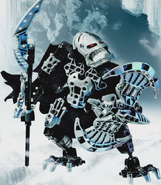 Vezon as he appears in this set