10213 Shuttle Adventure is a LEGO Exclusives set based on the Space theme released in late June 2010. It contains three minifigures and 1204 pieces. The set is based on a NASA Space Shuttle and includes the exterior fuel tank, the solid-fuel booster rockets and part of the launch platform. It includes two astronauts (one male, one female) and a Service crew member.

On the bottom of the orbiter are two solid rocket boosters and the external fuel tank, which can all be separated. Inside the orbiter, the cockpit is furnished with a control panel and seats both astronauts. Rather than using a conventional windshield, there are transparent, short 1x1 sloping roof tiles laid across the front of the cockpit. In the middle section of the orbiter, the payload bay houses a satellite. The payload bay can be opened and closed easily. There is also an arm which holds the satellite in place. This arm represents the Canadarm used on the real orbiters. It can also fold to allow the satellite to be pulled out easily. At the rear of the shuttle are the main engines and tail. The landing gear is also retractable.

The Launch Station of this set contains a grey colored baseplate with bricks to support the shuttle upright. A small ground maintenance vehicle driven by a service crew member is also included.

The Space Shuttle in this set is modelled after the NASA Space Shuttle orbiters, but is not named after any of them. The set also includes what is said to be the Chandra X-Ray Observatory, which was launched in 1999.

The shuttle shedding its boosters

The shuttle deploying its satellite
Add a photo to this gallery 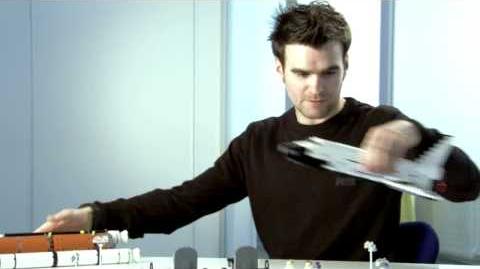