This article is about the Ultimate Collector's Series set. For the Minifigure version, see R2-D2.

10225 R2-D2 is a UCS Star Wars set released in May 2012.[2] It has a retractable third leg that can be dropped with a rear switch and rotating dome head. The front panels open to reveal a buzz saw and computer linkage tool. This model also includes a fact plaque to display along with an R2-D2 minifigure. More outer detail on this set includes black photoreceptors, a red sensor, and an accurate blue, gray, and white colour scheme. The hologram recorder/transmitter and charger are also visible. This set is over 12 inches (31 cm) high and 7 inches (18 cm) wide. It contains 2,127 pieces, making it the 19th largest LEGO set in history.

This is the third full minifigure to be made into an Ultimate Collector's Series set. The first was the 2002 Yoda. There was also a 2008 General Grievous. A bust of the sith apprentice Darth Maul was also made in 2001. R2-D2 has also been made as a 2002 TECHNIC set and a 1999 mindstorms set. This will be the seventh LEGO R2-D2 as a minifigure or a set to be made in LEGO. 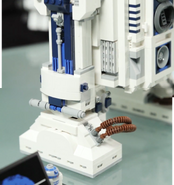