Brickipedia
Register
Don't have an account?
Sign In
Advertisement
in: Class 3 articles, Sets listed for ages 14+, 2013 sets,
and 4 more
English

10233 Horizon Express is a Creator Expert Trains set released on January 1, 2013. It includes 1351 pieces that build into a train similar to the TGV. It includes 6 minifigures. It was unveiled at the LEGO Fan Weekend in Denmark in 2012. The train can be motorized by adding 8878 Power Functions Rechargeable Battery Box, 8887 Transformer 10VDC, 8884 Power Functions IR Receiver, 8879 Power Functions IR Speed Remote Control, 88002 Train Motor and 8870 Power Functions Light. Two trains can be connected to make a full-sized train set.

The train is mainly orange, white, and black and consists of three cars. The first car seats the engineer and features controls for driving the train. The second car (referred to as a First Class car) features a seating area for the passengers, windows, a computer, and a newspaper rack. The third car features an enclosed bar with bottles and a cash register, seats, tables, a coffee machine, and drawers. 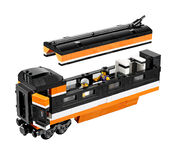 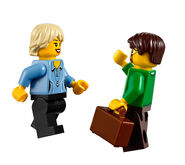 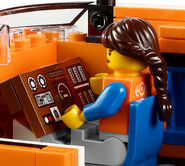