The Tower of Orthanc

The dungeon is the first floor of Orthanc is held up two 2x8 pillars, on the floor there is two bones (kept in place by red holders), two minifigure skulls and a grey rat. In the background there are some glowing eyes inside cells and three wargs achieved by stickers.

The entrance is the second floor of Orthanc and has two white hand banners on opposite sides, a small corridor leading to a dead-end and a grey microfigure posing as a small statue. On the floor there's a trapdoor leading to the dungeon which can be controlled by a piece just below meant for unwanted visitors.

The Throne Room is the third floor of Orthanc and includes another version of the Palantír this time a small grey and green ball which can light-up by pushing the chandelier on the roof of the second floor activating a light-up brick just below the Palantír. This room is very similar to the The Wizard Battle but does not have the feature in Saruman's throne.

The Alchemy room is the fourth floor of Orthanc and includes a bomb, the same as in Helm's Deep. It also contains a table with a couple of potions on top, in the middle there's a cauldron with silver 1x1 round studs which could represent gunpowder or metal.

The Library is the fifth floor in the tower and contains 5 paintings of the other wizards of Middle-earth including Saruman himself, Radagast and Gandalf the Grey. Around the room there's a table, two books and a scroll. In the middle of the room is the space for the foldable ladder on the ceiling leading to the attic.

The attic is the sixth and final floor of Orthanc and includes a helmet and a breastplate both with the white hand of Saruman and a scimitar on display. Also in this room is the other 3 staffs of the lost wizards one of which is Radagast's. On the wall is a picture of the Eye of Sauron on top of Barad-dur on both sides of the picture are two keys meaning to represent the two keys of the two towers of Middle-earth including The Tower of Orthanc, the other being Barad-dur located in Mordor. On the floor is the ladder down to the library.

Treebeard, an Ent, is included. He has flexible joints, and a throwing function at the back, allowing him to catapult minifigures held in his hand.

The Tower of Orthanc was the tower in the middle of Isengard. Once a fortress of Gondor, it was now home to Saruman, the leader of the wizards, until he studied too deep into the arts of Sauron and tried to convince Gandalf to join with the dark lord. When Gandalf turned down his offer, they fought and Gandalf was imprisoned. After the battle, Saruman turned all of Isengard into a giant stronghold to create Uruk-hai. After Gwaihir rescued Gandalf from the tower, the grey wizard was able to bring news to the elves that Saruman had betrayed them. It continued to serve this evil role until (after burning down the southern edge of Fangorn) it was flooded by Treebeard and the other vengeful Ents. 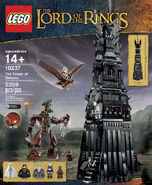 The inside of the tower

The top of Orthanc

Gandalf and The Great Eagle

The room with the other Istari staffs and the two keys

The inside and outside of the tower

A promotional poster including the Mouth of Sauron

Advertising early VIP release
Add a photo to this gallery