The Taj Mahal (/ˌtɑːdʒ məˈhɑːl, ˌtɑːʒ-/; meaning "Crown of the Palace") is an ivory-white marble mausoleum on the south bank of the Yamuna river in the Indian city of Agra. It was commissioned in 1632 by the Mughal emperor, Shah Jahan (reigned from 1628 to 1658), to house the tomb of his favourite wife, Mumtaz Mahal. The tomb is the centrepiece of a 17-hectare (42-acre) complex, which includes a mosque and a guest house, and is set in formal gardens bounded on three sides by a crenellated wall.

Construction of the mausoleum was essentially completed in 1643 but work continued on other phases of the project for another 10 years. The Taj Mahal complex is believed to have been completed in its entirety in 1653 at a cost estimated at the time to be around 32 million rupees, which in 2015 would be approximately 52.8 billion rupees (U.S. $827 million). The construction project employed some 20,000 artisans under the guidance of a board of architects led by the court architect to the emperor, Ustad Ahmad Lahauri.

The Taj Mahal was designated as a UNESCO World Heritage Site in 1983 for being "the jewel of Muslim art in India and one of the universally admired masterpieces of the world's heritage". It is regarded by many as the best example of Mughal architecture and a symbol of India's rich history. The Taj Mahal attracts 7–8 million visitors a year. In 2007, it was declared a winner of the New7Wonders of the World (2000–2007) initiative.

The set contains 5923 pieces, and retails for $369.99 in the USA. The main structure is the Taj Mahal, which has a white exterior and what appears to be three large stories, with the top story opening up onto balconies on either side. There are three domes on top that contain the third story and balconies, and they have gold pillars sticking out the very top. There are stairs leading up to the base of the building, and the baseplate surrounding the building is blue and white mosaic. On each corner of the basic square structure is a tall tower, that has numerous segments and opens up into a little balcony on the top, as well as little golden pillars sticking out the tops. 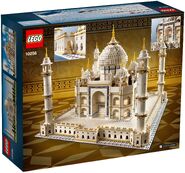 $499.99 +
Released
2017 +
ShopDescription
Build and discover the Taj Mahal! The huge … Build and discover the Taj Mahal! The huge ivory-white marble mausoleum, renowned as one of the world’s architectural wonders, was commissioned in 1631 by the Emperor Shah Jahan in memory of his wife, the Empress Mumtaz Mahal. This relaunched 2008 LEGO® Creator Expert interpretation features the structure's 4 facades with sweeping arches, balconies and arched windows. The central dome, subsidiary domed chambers and surrounding minarets are topped with decorative finials, and the raised platform is lined with recessed arches. The model is finished with ornate detailing throughout and intricate tilework around the base. With more than 5,900 pieces, this set is designed to deliver a rewarding building experience and makes a great display piece for the home or office.</br></br>*LEGO® interpretation of the real-world architectural wonder, the Taj Mahal.</br>*Relaunched 2008 model, featuring 4 facades with arches and arched windows; central dome, 4 subsidiary domed chambers and 4 minarets, all topped with decorative finials; raised platform lined with recessed arches; ornate detailing throughout; and intricate tilework around the base.</br>*Divides into 7 modular sections for easier transportation.</br>Put your LEGO® building skills to the test with one of the largest LEGO models ever created!</br>*Special elements include 6 blue 16x32 baseplates, white 1x5x4 bricks with bow, lots of transparent elements, ‘Erling’ bricks and ‘jumper’ plates.</br>*This set includes over 5,900 LEGO® pieces.</br>*Measures over 16” (43cm) high, 20” (51cm) wide and 20” (51cm) deep.high, 20” (51cm) wide and 20” (51cm) deep. +
Theme
Creator +
Title
Taj Mahal +
Type
Set +
USPrice
$369.99 +