Brickipedia
Register
Don't have an account?
Sign In
Advertisement
in: Class 2 articles, Sets listed for ages 16+, Creator,
and 4 more
English

The Harley-Davidson Fat Boy is a popular V-twin softail cruiser motorcycle with solid-cast disc wheels. Designed by Willie G. Davidson and Louie Netz, Harley-Davidson built a prototype Fat Boy in Milwaukee for the Daytona Bike Week rally at Daytona Beach in 1988 and 1989. Fat Boys produced from 1990-2017 are coded FLSTF, and FLFB (& FLFBS) from 2018. The name is said to come from the bike's "massive presence", and that the name gave a link to the earlier Harley-Davidson "Fat Bob" model. The Fat Boy's frame is derived from the 1984 "Softail" which appears to have a rigid hardtail chassis but which in fact has a swinging arm with concealed springs that was originally designed in a Missourian garage in the 1970's by "a mechanical engineer" named Bill Davis and later Patented in 1976. Willie G the grandson of Harley-Davidson co-founder William A. Davidson originally turned down engineer Bill Davis' softail concept; but the company later relented, buying the rights and designing its own softail frame in-house. 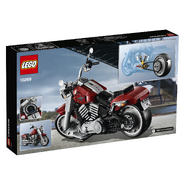 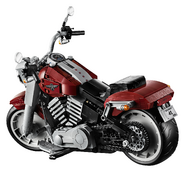 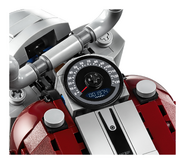