Brickipedia
Register
Don't have an account?
Sign In
Advertisement
in: Class 2 articles, Sets listed for ages 16+, 10000 sets,
and 4 more
English

Old Trafford comprises several large sections, beginning with the pitch. This structure is extremely simple, relying primarily upon five printed tiles which are situated across a rigid frame. Technic bricks provide adequate support to the East Stand and some unusual 1×8 slopes are positioned on either side. Several brackets are fixed across the internal wall alongside three conspicuous bars that are visible below. The tiered seating is designed using 1×2 grille bricks which are connected sideways and decorated with multiple stickers, replicating their actual appearance. Exactly the same technique appears prominently throughout this whole set and 345 red grille bricks are therefore distributed across the stadium. The Stretford End features similar building techniques, but the external design is different and there is colour variation in the stands. Technic elements are used in the Sir Alex Ferguson Stand. This structure exhibits various techniques which comprise the narrower stands, although the rounded corners are distinctive and make use of hinge plates. Construction becomes increasingly elaborate at each corner. Trans-light blue 1×2 bricks are stacked around the exterior and another layer is placed inside, displaying numerous exposed studs which are subsequently covered with seating. Exactly the same structure occupies the opposite corner before two enormous banks of seating are attached. The angled sections are assembled in three separate directions. While the lower tier is constructed with its studs facing towards the pitch, each upper level incorporates two halves which are fixed sideways with opposing orientations.Another substantial roof protects these seats and includes three large panels. The central section is relatively basic and connects to four hinges behind the seating while the curved panels on either side rest upon the stadium walls.

The final stand seems reasonably similar to its larger counterpart as the base is assembled, making further use of Technic elements which are hidden behind black bricks and light bluish grey tiles. Additional rows of seats are positioned inside the Sir Bobby Charlton Stand before the roof is placed over the top. Contrasting with the other structures, this roof is attached horizontally. Its construction is comparatively elaborate though, including numerous 1×1 brackets which link the curved panels to that in the centre. They also feature a new 1×4×2 2/3 curved brick that slots inside 1×1×3 1/3 arch bricks. Finally, the large stands are united with the remainder of this stadium. They are attached using blue Technic axle pins so can be disconnected easily, contrasting with the narrower stands that rely upon standard Technic pins instead.

Nicknamed "The Theatre of Dreams" by Bobby Charlton, Old Trafford has been United's home ground since 1910, although from 1941 to 1949 the club shared Maine Road with local rivals Manchester City as a result of Second World War bomb damage. Old Trafford underwent several expansions in the 1990s and 2000s, including the addition of extra tiers to the North, West and East Stands, almost returning the stadium to its original capacity of 80,000. Future expansion is likely to involve the addition of a second tier to the South Stand, which would raise the capacity to around 88,000. The stadium's record attendance was recorded in 1939, when 76,962 spectators watched the FA Cup semi-final between Wolverhampton Wanderers and Grimsby Town.

Old Trafford has hosted FA Cup semi-finals, England fixtures, matches at the 1966 World Cup and Euro 96 and the 2003 Champions League Final, as well as rugby league's annual Super League Grand Final and the final of two Rugby League World Cups. It also hosted football matches at the 2012 Summer Olympics, including women's international football for the first time in its history. 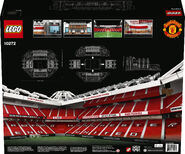