Brickipedia
Register
Don't have an account?
Sign In
Advertisement
in: Class 3 articles, Sets listed for ages 18+, 2021 sets,
and 2 more
English

The Volkswagen Type 2, known officially (depending on body type) as the Transporter, Kombi or Microbus, or, informally, as the Bus (US), Camper (UK) or Bulli (Germany), is a forward control light commercial vehicle introduced in 1950 by the German automaker Volkswagen as its second car model. Following – and initially deriving from – Volkswagen's first model, the Type 1 (Beetle), it was given the factory designation Type 2.

Like the Beetle, the van has received numerous nicknames worldwide, including the "microbus", "minibus", and, because of its popularity during the counterculture movement of the 1960s, "Hippie van/bus". 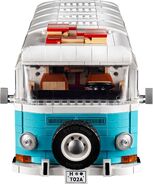 $269.99 +
Released
August 1, 2021 +
ShopDescription
Whether you’re reliving past adventures, p … Whether you’re reliving past adventures, planning future travels or simply want to celebrate your passion for camper vans, you’ll love this LEGO® Volkswagen T2 Camper Van (10279) model building project. Take your time building the camper van model then explore its detailed interior before placing it on display to remind you that there’s a world of adventure just around the corner.</br></br>Packed with authentic details</br></br>Camper van fans will love all the neat design details packed into this VW model. New LEGO elements recreate much-loved features from the real camper van, including the iconic front windscreen, textile curtains and the textile pop-up tent. There’s also a new LEGO tire shape, working steering, a sliding door, surfboard, 2 folding chairs and flower-power stickers.</br></br>Experience the journey</br></br>This set is part of a collection of LEGO building sets for adults who appreciate clever design and attention-to-detail. It offers an immersive build and will make a top gift for any VW camper fan.</br></br></br>* Build a faithful LEGO® model version of the Volkswagen T2 Camper Van. Explore all of its faithful features then place on display to admire this classic collectible item.</br></br></br></br>* Check out the authentic design details like the iconic large front windshield and the sliding door. Try out the working steering and open the hood to explore the engine.</br></br></br></br>* Discover a host of features and accessories in the Volkswagen van model, including the textile curtains, textile pop-up tent, surfboard and 2 folding chairs.</br></br></br></br>* Designed for adult LEGO® builders and camper van fans, this model offers a rewarding building project and is ideal if you’re looking for the best gifts and collectibles for VW camper fans.</br></br></br></br>* Measures over 6 in. (15 cm) high, 13.5 in. (35 cm) long and 5.5 in. (14 cm) wide, making an eye-catching display model.</br></br></br></br>* With its striking blue-and-white color scheme, this model looks amazing on display. Use the stickers to personalize your van with flower-power details.</br></br></br></br>* The interior furniture includes a camping kitchen with gas stove, sink, fridge, swing-out table, plus a foldable ‘rock and roll’-style bed.</br></br></br></br>* This LEGO® Volkswagen T2 Camper Van set is part of a range of creative building sets designed for adult building fans who love stunning design, intricate details and elegant architecture.</br></br></br></br>* LEGO® building bricks are manufactured from high-quality materials. They’re consistent, compatible and connect and pull apart easily every time – it’s been that way since 1958.</br></br></br></br>* With LEGO® pieces, safety and quality come first. That’s why they’re rigorously tested so you can be sure that the model is as robust as it is beautiful.the model is as robust as it is beautiful.
Theme
Creator +
Title
Volkswagen T2 Camper Van +
Type
Set +
USPrice
$179.99 +
Advertisement