1349 LEGO Studios Steven Spielberg MovieMaker Set is a Studios set released in 2000. It includes 433 pieces, and is one of the only sets to include the director, a minifigure similar to Steven Spielberg.

The set contains a working video camera, Studios video editing software, two collapsible towers, two dinosaurs (Tyrannosaurus rex and Baby Tyrannosaurus rex), a cat, a mechanical dinosaur foot, a camera track with camera, a guide stalks, vehicle, mobile fan, two studio lights, two mini buildings, earthquake baseplates, ten flames, and seven minifigures. The road plates can split apart and reveal magma to simulate an earthquake. The mini dinosaur can be used to simulate the dinosaur toppling the two mini buildings, or as a baby dinosaur for a plot element. The camera is functional and track can tilt forwards and backwards, rotate side to side, and shift left and right for different angles. The dinosaur foot can be utilized for close-up shots. Included is software to edit video that is shot through the camera. It includes various sound and video clips to place in the film, as well as a trio of sample short movies, which feature tips to improve movie effects. These can also be found in the director's handbook included with the set.

The set, with a laptop in the background 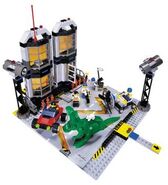 The set in action

Promotional artwork
Add a photo to this gallery