Brickipedia
Register
Don't have an account?
Sign In
Advertisement
in: Class 4 articles, Sets listed for ages 7–16, 1000 sets,
and 3 more

The set includes a large action scene with a Cameraman, Police Officer, Stunt Man (playing the role of a bank robber), and Director.

The set features several hundred dollar bills, gold coins and dynamite. A button on the building causes the building to "explode" into several pieces. Two cameras are included, one is the security camera, the other on a small vehicle manned by a cameraman. A seat for the director is included. It also includes a red motorbike and a white briefcase for the stunt man. 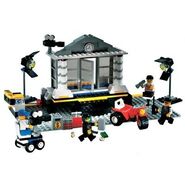