Brickipedia
Register
Don't have an account?
Sign In
Advertisement
in: Class 4 articles, Sets listed for ages 7 - 16, Jurassic Park 3,
and 4 more

1371 Spinosaurus Attack Studio is a Studios Jurassic Park III set that was released in 2001.

The set contains a Spinosaurus, a plane, a prop tree, a camera, a Cameraman, and a Stunt Man Actor. It has 178 pieces.

In this set, a Spinosaurus attacks a plane and its pilot. The Spinosaurus is made of parts from the Dinosaurs theme, with new printings and the JP3 (Jurassic Park 3) logo on its leg. The plane is a small one-person flyer. The Cameraman in the background films the action. 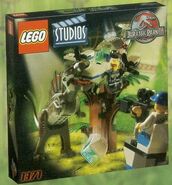