1382 Scary Laboratory is a Studios set released in 2002. Included are 492 pieces (more than in any other Studios set, barring product collections) to assemble a laboratory and seven minifigures: a Skeleton, Frankenstein's Monster, a Gentleman, a lady, a Mad Scientist and a Director. It is notable for being the first LEGO set to feature a Frankenstein's Monster figurine.

The set consists of several parts. The first of these is a large laboratory, the second of these is a gate, and, finally, there is a small dressing-room, a camera on a movable tread, and a small desk for storing scientific equipment.

The gate is built into a small section of wall, with a sticker consisting of bricks and ivy. The gate is attached to the wall by several hinge pieces, and can open and close. As extra decorations, spears and flames are added to the wall surrounding the gate.

The laboratory is built out of three separate parts: Two towers, which are attached together by means of a small upper area that bridges the gap between to two, and a central section that resembles a catapult.

The first of the towers is built on an 8×8 base and has three levels. The first of these simply contains a toolkit, which includes a drill, a magnifying glass, a screwdriver, and an oilcan. The toolkit is backed by a wall, the back side of which has a sticker with a picture of a wall with ivy and a flying bat stuck to it. The kit is also surrounded by four pillars, one on each side of the base-plate.

The second level contains a treasure chest with a skull hidden in it, as well as a Scorpion, and a jack-o-lantern. Like the previous level, this one has four pillars that support the next one, as well as a wall on the farthest side. However, unlike the previous level, this wall is brick-built, and has a window in it.
The third and final level has a great deal of machinery on it, some of which is merely a sticker on a pillar, and some of which is actually physically built. There are four major pieces of brick-built machinery, the first of which would appear to be some sort of generator, and it is built with a transparent circular brick and a tube with a gear atop it. The second part is built into a back pillar (of which there are three), and simply consists of a large gear and two glowing cone-shaped lights. The third part is a large mechanical chair that can move back and forth, has a bat either standing on top of it or built into it, and is quite possibly meant to be powered by the other two. This level has no proper walls, as there are no pillars in the front, only the chair, and instead of a wall in the back, there are the aforementioned three pillars. On top of these is a forth and final piece of machinery built on a platform of bricks. This is a large glowing green device that is almost certainly a power generator of some sort; it consists of a large lightning-rod-like neon green pole, with a glowing green dynamo below it.

The second tower is, like the other, built on an 8×8 base, and also has three levels. The first level has a single-piece back wall, as well as three pillars surrounding the main floorspace. Nonetheless, in place of a fourth and final regular pillar, there is a single brick-built one, which is attached into a door which covers the front wall of the level by means of several hinged pieces. The door resembles that of a safe. Behind the door is a platform on a rotating base, which has a wall built in the middle of it and, on one side of that wall, a skeleton. Any other minifigure can stand on the other side. Atop the platform's wall is a large TECHNIC beam piece which sticks all the way up to the second level, which mainly consists of a large stand, into which the beam goes up, and to which another beam is attached, which goes all the way up to the third level.
The second level has four pillars supporting the next level, and covering the stand that the beam piece connects to is a small wall at the front with a dome piece printed with electricity attached to it. The back wall of the level is brick-built and depicts a window.

The beam from the second level goes up to the third level and is allowed into it by the fact that the floor made of several beam pieces, the middlemost of which has several holes in it, and it is out of these that the beam comes. The main part of the third level is occupied by a small tower of which, at its top, the beam pops out (behind the beam is a decorational flame piece). At this point, a tube piece is attached to the beam, and then a jar, with a skull in it. By turning the jar, and therefore the beam as well, the platform in the first level can be rotated, turning the minifigure that is visible when the door is opened from the skeleton to a normal minifigure, or vice versa. To one side of the tower is a single pillar, which has a bat atop it.

The central section of the laboratory, between the two towers, is a large mechanical structure, which in many ways resembles a catapult, or possibly a huge seesaw. At one end of the structure sits Frankenstein's Monster, who is, as yet, inanimate, and waiting to be awakened by a blast from the large device (possibly a laser, or a conductor of some sort), which rests above him on a platform that connects the two towers.

There are two other small structures included in the set. One of which is an actor's dressing-room, as it consists of a desk with a medieval helmet and a mirror on it; a chair; and a stand on which hangs a Ghost's sheet.
The second structure is a large toolkit, probably for the Mad Scientist.
In addition to these two brick-built structures, there is also a large cardboard backdrop included in the set.

The Mad Scientist has black legs with a little white and sand blue printing on them. His torso is white, and has buttons and a stethoscope printed on it. He has grey hands. One side of his face depicts a large smile, glasses, and thick eyebrows. The other side of his face is very furry, has an angry expression, and red eyes. His hair is flat and black.

Frankenstein's Monster has unprinted grey legs, a brown torso printed with a jacket, a blue shirt and a belt, and sand green hands. His sand green face has a soporific expression, and it has a zipper on its back. On top of his head is a large piece that acts as an extension of his forehead. It has a zipper printed on it. The monster is very similar to The Monster (Minifigures) from Minifigures (Theme).

The Director has unprinted black legs, a white torso printed with an orange vest (and a clapboard with "Director" on it printed on his back), and yellow hands. His face is yellow, has a grey beard, and black glasses. He wears a black cap.

The Gentleman has unprinted tan legs, a tan torso with yellow hands, and a red tie. His face is also yellow, and is double-sided. One side has a confident smirk, and the other a terrified screaming expression. He has simple brown hair.

The Lady has an unprinted red slope piece being used as a dress, and a printed red torso with white legs and yellow hands. Like the Gentleman, she has a double-sided face, one of which is confident, and one of which is terrified. Both sides have orange hair printed on them. She has an orange hairpiece, tied up in a bun.

Finally, there is a Skeleton. The one included in the set is identical to the classic skeleton, with fully movable arms, and an oddly friendly expression.

The story of the set, according to a small comic book included in the back of the instructions, is that the Mad Scientist, working on bringing The Monster to life in his lab, was interrupted in his work by two people who were chased into his laboratory by a ghost. Angry at this interruption, the scientist transforms himself into a monster, and tries to chase the intruders out of his lab. In the confusion, a pumpkin is knocked over, which lands on a lever, causing a bolt of electricity to shoot into the monster, activating him. So pleased is the scientist by this that he holds a tea party for the intruders.[1]

The box and instructions art 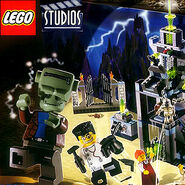 £39.99 +
Released
2002 +
ShopDescription
Time to build a monster!
What … Time to build a monster!<br />What monster movie is complete without a scary laboratory? Walk through the rusty gate and you're in the lab of the mad scientist! He's been making monsters all day, and he would just love a little company. Set up the camera (available only in set 1349) and catch the action as the hero enters the secret door. Spin the skeleton head and the hero is gone – and there's a skeleton in his place!one – and there's a skeleton in his place! +
Theme
Studios +
Title
Scary Laboratory +
Txt1
Skeleton +
Txt2
Frankenstein's Monster +
Txt3
Gentleman +
Txt4
Lady +
Txt5
Mad Scientist +
Txt6
Director +
Type
Set +
USPrice
$49.99 +