1391 Jala was a promotional 8 piece BIONICLE set released in September 2001. It was available with a McDonald's Happy Meal.

The set came with eight mainly red and yellow pieces along with a mask, that were used to build the character. The set included a disk which could be flung by putting it into Jala's hand, pulling it back, and releasing. Later on in the BIONICLE series he was released as a Toa Inika and Toa Mahri. 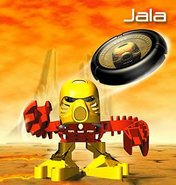