1650 Maersk Line Container Ship is a LEGO Maersk set that was released in 1974.

This set has a exclusive blue boat hull piece with the words 'MAERSK LINE' written on the side in black letters. The ship can carry eight containers, all of which come in the set. They appear to be grey with blue stickers on the side. The ship has a white building with transparent pieces for windows about in the middle.

This set is much smaller than the other two versions of this set, as it has just over 200 pieces rather than nearly 1000. 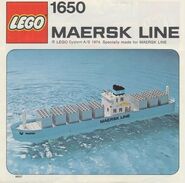 Retrieved from "https://brickipedia.fandom.com/wiki/1650_Maersk_Line_Container_Ship?oldid=1971556"
Community content is available under CC-BY-SA unless otherwise noted.