1651 Maersk Line Container Lorry was a LEGO Maersk set that was released in 1980. It came with one minifigure, two trailers, each with a Maersk storage container mounted on it, and one blue truck.

The main part of the set was a blue Maersk cab with two trailers, one smaller than the other. Both of the trailers have a storage container on top of them. The cab has a transparent windscreen and opening blue doors. The containers are built of light grey pieces, with blue stickers on them for the Maersk logo and wordmark. The doors at the back of the container can open. The bases of the trailers are mostly built out of blue. They each have four wheels, two on each side, as does the cab. 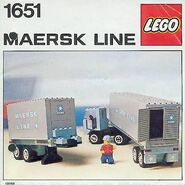