20017 Dagger Trap is a 52 piece Prince of Persia BrickMaster exclusive set that was released in 2010. A picture of the set could be seen in the May–June 2010 LEGO Magazine. In the US it was the Brickmaster exclusive for September–October 2010. The set includes Dastan, two Snakes, and The Dagger of Time. In the set Dastan must retrieve the dagger without getting caught by the snakes or tripping the falling step. This set appears to be homage to the video game that the movie was based on. 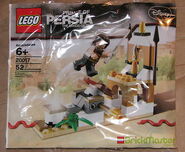