"Time to bring out the heavy hitter!"
―Nathan Evo

Nathan Evo, a new Hero from the Production Line, is one of the first yellow-armoured TECHNIC figures, both in BIONICLE and Hero Factory. He sports a violet core and head, along with a violet spike on his left arm, and he wields an ice spear shooter as a weapon against the Fire Villains. Evo's secondary colour is gunmetal, that colour manifesting itself in a total of four pieces in the set, his headgear, body armour, and two new blaster pieces. Along with the standard 2.0 helmet, Evo has headgear with vents at the front. This is the only set with 2.0 feet of yellow, as the Breakout form has gunmetal feet instead. He wears his gunmetal Ordeal of Fire badge on his left thigh.

Nathan is the strongest of the new heroes and operates as Heavy Artillery for the team. He was built in the 2.0 upgrade and fought the Fire Villains on Tanker Station 22. 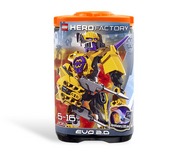