2068 Nex 2.0 is a Hero Factory set that was released in January 2011. It includes an orange hero with a green core and a claw-like weapon.

Julius Nex's first variant sports a dark green head and core, orange armour, and a white secondary colour. His weapon is an orange shield with two blue laser blades and double saws, along with pincers at the back. It can switch around so that the pincers face the front. All of Nex's orange armour plates are the same size. There is only one armour piece that is different, the white Ordeal of Fire badge. Nex's headgear includes a chainsaw on the side.

His full name is Julius Nex. He is the team's technician. Created in 2.0 form, Nex is a tech-crazy Hero who is jealous when someone else receives a new gadget before him. 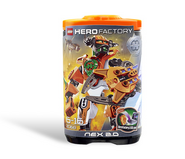