The Imperial Hotel (帝国ホテル teikoku hoteru) is a hotel in Uchisaiwaicho, Chiyoda ward, Tokyo. It was created in the late 1880s at the request of the Japanese aristocracy to cater to the increasing number of Western visitors to Japan. The hotel site is located just south of the Imperial Palace grounds, next to the previous location of the Palace moat. The modern hotel overlooks the Palace, the 40-acre (16 ha) Western-style Hibiya Park, and the Yurakucho and Ginza neighborhoods.

Three main buildings have stood on the hotel site, each of which embodied the finest Western design of its era. Including annexes, there have been at least 10 structures that have been part of the Imperial Hotel, including two designed by Frank Lloyd Wright. 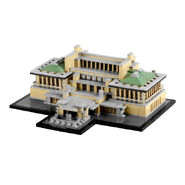 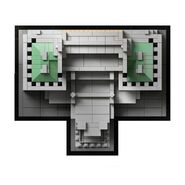 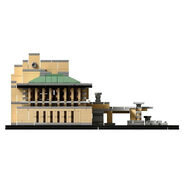 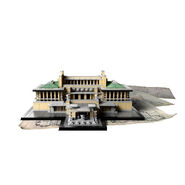 x12px 1299.00 kr +
Released
March 1, 2013 +
ShopDescription
Build Frank Lloyd Wright’s Tokyo master … Build Frank Lloyd Wright’s Tokyo masterpiece!</br></br>Designed by Frank Lloyd Wright from 1916-1922, the Imperial Hotel of Tokyo, Japan was commissioned to bridge the divide between the Western and Eastern worlds. This modern masterpiece exemplifies Frank Lloyd Wright's imagination and genius, designed in the shape of it’s own monogram logo and strong enough to withstand Japan’s frequent and devastating earthquakes. Today, the main entrance and lobby are all that remains of this icon, displayed in the Meiji Museum in Nogoya, Japan. This highly detailed LEGO® model, co-developed and designed by LEGO architects, captures all of the distinctive features that made the Imperial Hotel an architectural landmark for generations. The assembled Imperial Hotel model stands over 11" (28cm) wide on a base with printed name label. Set includes a booklet with facts about the building, its construction and its history.</br></br>*Replica of real-world architectural landmark</br>*Booklet included with details on design and history (English language only)</br>*Explore advanced building techniques</br>*Collect all of the LEGO® Architecture series models</br>*Measures over 4" (10cm) tall, 11" (28cm) wide and 9" (24cm) deep) tall, 11" (28cm) wide and 9" (24cm) deep +
Theme
Architecture +
Title
Imperial Hotel +
Type
Set +
USPrice
$129.99 +