21018 United Nations Headquarters is an Architecture set released in 2013.

The United Nations is headquartered in New York City, in a complex designed by a board of architects led by Wallace Harrison, and built by the architectural firm Harrison & Abramovitz. The complex has served as the official headquarters of the United Nations since its completion in 1952. It is located in the Turtle Bay neighborhood of Manhattan, on 17 to 18 acres (6.9 to 7.3 ha) of grounds overlooking the East River. Its borders are First Avenue on the west, East 42nd Street to the south, East 48th Street on the north and the East River to the east. The term "Turtle Bay" is occasionally used as a metonym for the UN headquarters or for the United Nations as a whole.

The headquarters holds the seats of the principal organs of the UN, including the General Assembly and the Security Council, but excluding the International Court of Justice, which is seated in the Hague. The United Nations has three additional, subsidiary, regional headquarters, or headquarters districts. These were opened in Geneva (Switzerland) in 1946, Vienna (Austria) in 1980, and Nairobi (Kenya) in 1996. These adjunct offices help represent UN interests, facilitate diplomatic activities, and enjoy certain extraterritorial privileges, but do not contain the seats of major organs.

None of the United Nations' 15 specialized agencies (such as UNESCO) are located at the headquarters. However, some "autonomous subsidiary organs", such as UNICEF, have their headquarters at the UNHQ.

A top view of the set 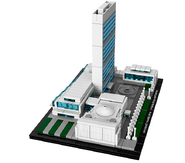 Another view of the set
Add a photo to this gallery