Brickipedia
Register
Don't have an account?
Sign In
Advertisement
in: Class 3 articles, Sets listed for ages 12+, Pages that link to Legopedia (Russian),
and 4 more
English

The Eiffel Tower is a wrought-iron lattice tower on the Champ de Mars in Paris, France. It is named after the engineer Gustave Eiffel, whose company designed and built the tower.

Constructed from 1887 to 1889 as the entrance to the 1889 World's Fair, it was initially criticized by some of France's leading artists and intellectuals for its design, but it has become a global cultural icon of France and one of the most recognizable structures in the world. The Eiffel Tower is the most-visited paid monument in the world; 6.91 million people ascended it in 2015.

The tower is 324 meters (1,063 ft) tall, about the same height as an 81-story building, and the tallest structure in Paris. Its base is square, measuring 125 meters (410 ft) on each side. During its construction, the Eiffel Tower surpassed the Washington Monument to become the tallest man-made structure in the world, a title it held for 41 years until the Chrysler Building in New York City was finished in 1930. Due to the addition of a broadcasting aerial at the top of the tower in 1957, it is now taller than the Chrysler Building by 5.2 meters (17 ft). Excluding transmitters, the Eiffel Tower is the second tallest free-standing structure in France after the Millau Viaduct.

The tower has three levels for visitors, with restaurants on the first and second levels. The top level's upper platform is 276 m (906 ft) above the ground – the highest observation deck accessible to the public in the European Union. Tickets can be purchased to ascend by stairs or lift to the first and second levels. The climb from ground level to the first level is over 300 steps, as is the climb from the first level to the second. Although there is a staircase to the top level, it is usually accessible only by lift. 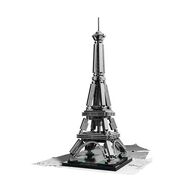 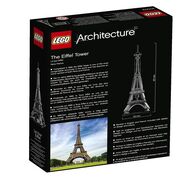 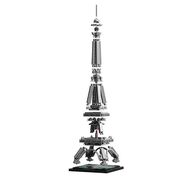 x12px $69.99 +
Released
2014 +
ShopDescription
Build your own LEGO® interpretation of … Build your own LEGO® interpretation of the iconic Eiffel Tower!</br></br>Presenting the LEGO® Architecture interpretation of one of the most iconic landmarks ever constructed – The Eiffel Tower! Designed and built by French entrepreneur, Gustave Eiffel, the original 324-meter-tall masterpiece of wrought iron engineering formed the grand entrance to the 1889 World’s Fair, held in Paris to celebrate the 100th anniversary of the French Revolution. During construction, the 18,038 wrought iron elements making up the tower’s lattice structure were bolted together at Eiffel’s factory on the outskirts of Paris, before being transported to the site, hoisted into place by steam-powered cranes operating from the elevator shafts, and assembled using no less than 2.5 million individual rivets. The resulting structure was extremely rigid and over the years has withstood storms, floods and everything else mother nature has thrown at it. Today, The Eiffel Tower is one of the world’s most popular landmarks, attracting millions of curious visitors from around the world each year. With this exceptional model, you can now build your very own 321-piece Eiffel Tower in LEGO brick form and display it in your home, office or wherever you like!</br></br>*Interpretation of real-world architectural landmark The Eiffel Tower in LEGO® bricks </br>*Booklet included with details on design, architecture and history of the tower (English and French languages only. Other languages available for download at LEGO.com/architecture) </br>*Measures over 12” (31cm) high, 4” (11cm) wide and 4” (11cm) deep </br>*Collect the entire Landmark and Architecture series sets </br>*The LEGO® Architecture product line is about celebrating the world of architecture through the medium of the LEGO brick and for all with an interest in design, architecture and historyterest in design, architecture and history +
Theme
Architecture +
Title
The Eiffel Tower +
Type
Set +
USPrice
$34.99 +
Advertisement