Brickipedia
Register
Don't have an account?
Sign In
Advertisement
in: Class 3 articles, Sets listed for ages 12+, 2014 sets,
and 4 more
English

Marina Bay Sands is an integrated resort fronting Marina Bay in Singapore, owned by the Las Vegas Sands corporation. At its opening in 2010, it was billed as the world's most expensive standalone casino property at S$8 billion, including the land cost. The resort, designed by Moshe Safdie, includes a 2,561-room hotel, a 120,000-square-metre (1,300,000 sq ft) convention-exhibition centre, the 74,000-square-metre (800,000 sq ft) The Shoppes at Marina Bay Sands mall, a museum, two large theatres, "celebrity chef" restaurants, two floating Crystal Pavilions, art-science exhibits, and the world's largest atrium casino with 500 tables and 1,600 slot machines. The complex is topped by a 340-metre-long (1,120 ft) SkyPark with a capacity of 3,900 people and a 150 m (490 ft) infinity swimming pool, set on top of the world's largest public cantilevered platform, which overhangs the north tower by 67 m (220 ft). The 20-hectare resort was designed by Moshe Safdie architects.

Marina Bay Sands was originally set to open in 2009, but its construction faced delays caused by escalating costs of material and labour shortages from the outset. The global financial crisis also pressured the owners, Las Vegas Sands, to delay its projects elsewhere to complete the integrated resort. Its owner decided to open the integrated resort in stages, and it was approved by the Singapore authorities. The resort and SkyPark were officially opened on 23 and 24 June 2010 as part of a two-day celebration, following the casino's opening on 27 April that year. The SkyPark opened the following day. The theatres were completed in time for the first performance of Riverdance on 30 November. The indoor skating rink, which uses artificial ice, opened to a performance by Michelle Kwan on 18 December. The ArtScience Museum opened to the public and the debut of a 13-minute light, laser and water show called Wonder Full on 19 February 2011 marked the full completion of the integrated resort.

The grand opening of Marina Bay Sands was held on 17 February 2011. It also marked the opening of the seven celebrity chef restaurants. The last portion of the Marina Bay Sands, the floating pavilions, were finally opened to the public when the two tenants, Louis Vuitton and Pangaea Club, opened on 18 and 22 September 2011, respectively. 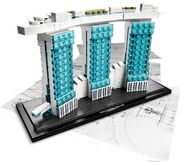 $89.90 +
Released
2014 +
ShopDescription
One of the most amazing achievements that … One of the most amazing achievements that man has ever attained is the mastery of structural engineering through great architecture. Celebrating these masterpieces through its Architecture series, The LEGO Group officially iconize Marina Bay Sands, a state-of-the-art modern day marvel, with its LEGO bricks.</br></br>Voted as one of the most inspiring structures of recent times through an online poll on the LEGO Architecture website, this model focuses on the signature hotel complex that showcases the three towers and the Sands Skypark which is the centerpiece of Singapore’s skyline and urban renewal strategy today. The integrated resort, designed by renowned architect Moshe Safdie, opened in April 2010 and has welcomed 38.5 million visitors in 2012 alone.</br></br>“LEGO Architecture is about celebrating great architecture and historical landmarks that we, as a people, have emotional connections to and whether it is because of the fascinating story behind a famous building or a souvenir of a memorable trip. LEGO Architecture is definitely for everyone.” says Mette Have Larsen-Ledet, Senior Marketing Manager on LEGO Architecture.</br></br>“It is an honor for Marina Bay Sands to be selected as Singapore’s landmark to be interpreted with iconic LEGO bricks. Marina Bay Sands is often viewed as a piece of art with our striking architecture and the Architecture Series will allow guests from all over the world to bring a piece of Singapore landscape back home with them. LEGO has been inspiring people with the unlimited possibilities of arranging the bricks and we hope to continue this with the Marina Bay Sands set,” said Maunik Thacker, Senior Vice President of Marketing, Marina Bay Sands.</br></br>The Marina Bay Sands LEGO Architecture is a limited edition model. Products will be retailed at the Marina Bay Sands Hotel gift shop, located at Tower 2 hotel lobby, ArtScience Museum Shop and selected LEGO retailers in Asia, while stocks last.LEGO retailers in Asia, while stocks last. +
Theme
Architecture +
Title
Marina Bay Sands +
Type
Set +
Advertisement