Brickipedia
Register
Don't have an account?
Sign In
Advertisement
in: Class 3 articles, Sets listed for ages 12+, 21000 sets,
and 3 more

21036 Arc de Triomphe is an Architecture set released in 2017 under the Landmark Series subtheme.

The set contains 386 pieces, which are used to build a miniature Arc de Triomphe. The base plate is made of standard black tiles that say "Arc de Triomphe" on one of them. There is another layer of light brown tiles, and finally the build. The lowest levels of the arc have gray tiles, topped by white tiles, then light brown, then white tiles. Inside the two legs are blank microfigures, and on the side there are miniature arch openings. In the middle, under the arch, is a golden plate (the Tomb of the Unknown Soldier). The arch continues up, alternating between white and light brown tiles. The first layer of the top consists of multiple white Part 393701's pointing outwards, and they are topped by gray and white tiles. Above the tiles are alternating white studs and 1x1 square white studs. At the top is another layer of white tiles, topped by Part 393701's facing upwards, which are topped by a light brown tile.

The Arc de Triomphe is one of the most famous monuments in Paris, standing at the western end of the Champs-Élysées at the center of Place Charles de Gaulle, formerly named Place de l'Étoile — the étoile or "star" of the juncture formed by its twelve radiating avenues. The location of the arc and the plaza is shared between three arrondissements, 16th (south and west), 17th (north), and 8th (east).

The Arc de Triomphe honours those who fought and died for France in the French Revolutionary and Napoleonic Wars, with the names of all French victories and generals inscribed on its inner and outer surfaces. Beneath its vault lies the Tomb of the Unknown Soldier from World War I.

As the central cohesive element of the Axe historique (historic axis, a sequence of monuments and grand thoroughfares on a route running from the courtyard of the Louvre to the Grande Arche de la Défense), the Arc de Triomphe was designed by Jean Chalgrinin 1806, and its iconographic program pits heroically nude French youths against bearded Germanic warriors in chain mail. It set the tone for public monuments with triumphant patriotic messages.

Paris's Arc de Triomphe was the tallest triumphal arch until the completion of the Monumento a la Revolución in Mexico City in 1938, which is 67 metres (220 ft) high. The Arch of Triumph in Pyongyang, completed in 1982, is modelled on the Arc de Triomphe and is slightly taller at 60 m (197 ft). La Grande Arche in La Defense near Paris is 110 metres high. Although it is not named an Arc de Triomphe, it has been designed on the same model and in the perspective of the Arc de Triomphe. It qualifies as the world's tallest arch. 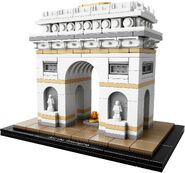