Brickipedia
Register
Don't have an account?
Sign In
Advertisement
in: Class 1 articles, Sets listed for ages 12+, Architecture,
and 3 more
English

Skyline
21043 San Francisco is an Architecture set released under the Skyline subtheme in 2019.

The first structures (from the left, in the front) are the Painted Ladies, Victorian and Edwardian houses and buildings repainted, starting in the 1960s, in three or more colors that embellish or enhance their architectural details. The most famous "Painted Ladies" are the buildings at 710-720 Steiner St, which have been used in multimedia such as Full House.

The second structure is the Transamerica Pyramid, which is a 48-story futurist building and the second-tallest skyscraper in the San Francisco skyline. Its height is surpassed by Salesforce Tower. The building no longer houses the headquarters of the Transamerica Corporation, which moved its U.S. headquarters to Baltimore, Maryland, but it is still associated with the company and is depicted in the company's logo. Designed by architect William Pereira and built by Hathaway Dinwiddie Construction Company, at 853 feet (260 m), on completion in 1972, it was the eighth-tallest building in the world.

The third structure is the Salesforce Tower, a 1,070-foot (326 m) office skyscraper in the South of Market district of downtown San Francisco. It is located at 415 Mission Street between First and Fremont Streets, next to the Transbay Transit Center site. Salesforce Tower is the centerpiece of the San Francisco Transbay redevelopment plan. The plan contains a mix of office, transportation, retail, and residential uses. Upon its completion in 2018, it became the tallest skyscraper in the San Francisco skyline, with a top roof height of 970 feet (296 m) and overall height of 1,070 feet (326 m), surpassing the 853 feet (260 m) Transamerica Pyramid. It is also the second-tallest building west of the Mississippi River after the 1,100 feet (335 m) Wilshire Grand Center in Los Angeles, though the Salesforce Tower is taller when Wilshire Grand Center's decorative spire is excluded.

To the right of the Salesforce Tower is the Golden Gate Bridge, a suspension bridge spanning the Golden Gate, the one-mile-wide (1.6 km) strait connecting San Francisco Bay and the Pacific Ocean. The structure links the American city of San Francisco, California – the northern tip of the San Francisco Peninsula – to Marin County, carrying both U.S. Route 101 and California State Route 1 across the strait. The bridge is one of the most internationally recognized symbols of San Francisco, California, and the United States. It has been declared one of the Wonders of the Modern World by the American Society of Civil Engineers.

Under the Golden Gate Bridge is Alcatraz Island, located in San Francisco Bay, 1.25 miles (2.01 km) offshore from San Francisco, California, United States. The small island was developed with facilities for a lighthouse, a military fortification, a military prison (1828), and a federal prison from 1934 until 1963. Beginning in November 1969, the island was occupied for more than 19 months by a group of Native Americans from San Francisco, who were part of a wave of Native activism across the nation, with public protests through the 1970s. In 1972, Alcatraz became part of a national recreation area and received designation as a National Historic Landmark in 1986.

San Francisco was founded on June 29, 1776, when colonists from Spain established Presidio of San Francisco at the Golden Gate and Mission San Francisco de Asís a few miles away, all named for St. Francis of Assisi. The California Gold Rush of 1849 brought rapid growth, making it the largest city on the West Coast at the time. San Francisco became a consolidated city-county in 1856. San Francisco's status as the West Coast's largest city peaked between 1870 and 1900, when around 25% of California's population resided in the city proper. After three-quarters of the city was destroyed by the 1906 earthquake and fire, San Francisco was quickly rebuilt, hosting the Panama-Pacific International Exposition nine years later. In World War II, San Francisco was a major port of embarkation for service members shipping out to the Pacific Theater. It then became the birthplace of the United Nations in 1945. After the war, the confluence of returning servicemen, significant immigration, liberalizing attitudes, along with the rise of the "hippie" counterculture, the Sexual Revolution, the Peace Movement growing from opposition to United States involvement in the Vietnam War, and other factors led to the Summer of Love and the gay rights movement, cementing San Francisco as a center of liberal activism in the United States. Politically, the city votes strongly along liberal Democratic Party lines. 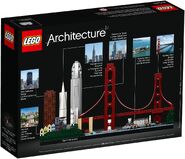