21044 Paris is an Architecture set released in 2019 under the Skylines subtheme.

The first structure (from the left) is the Arc de Triomphe, one of the most famous monuments in Paris, standing at the western end of the Champs-Élysées at the center of Place Charles de Gaulle. The Arc de Triomphe honors those who fought and died for France in the French Revolutionary and Napoleonic Wars, with the names of all French victories and generals inscribed on its inner and outer surfaces. Beneath its vault lies the Tomb of the Unknown Soldier from World War I.

The second structure is the Champs-Élysées, an avenue in the 8th arrondissement of Paris, France, 1.9 kilometres (1.2 mi) long and 70 metres (230 ft) wide, running between the Place de la Concorde and the Place Charles de Gaulle, where the Arc de Triomphe is located. It is known for its theatres, cafés, and luxury shops, for the annual Bastille Day military parade, and as the finish of the Tour de France cycle race.

The third structure is the Tour Montarnasse, a 210-metre (689 ft) office skyscraper located in the Montparnasse area of Paris, France. Constructed from 1969 to 1973, it was the tallest skyscraper in France until 2011, when it was surpassed by the 231-metre (758 ft) Tour First. As of March 2017, it is the 14th tallest building in the European Union. The tower was designed by architects Eugène Beaudouin, Urbain Cassan, and Louis Hoym de Marien and built by Campenon Bernard.

The fourth structure is the Grand Palais, a large historic site, exhibition hall and museum complex located at the Champs-Élysées in the 8th arrondissement of Paris, France. Construction of the Grand Palais began in 1897 following the demolition of the Palais de l'Industrie (Palace of Industry) as part of the preparation works for the Universal Exposition of 1900, which also included the creation of the adjacent Petit Palais and Pont Alexandre III. It has been listed since 2000 as a monument historique by the French Ministry of Culture.

The fifth structure is the Eiffel Tower, a wrought-iron lattice tower on the Champ de Mars in Paris, France. It is named after the engineer Gustave Eiffel, whose company designed and built the tower. The Eiffel Tower is the most-visited paid monument in the world; 6.91 million people ascended it in 2015. The tower is 324 metres (1,063 ft) tall, about the same height as an 81-storey building, and the tallest structure in Paris. Its base is square, measuring 125 metres (410 ft) on each side. During its construction, the Eiffel Tower surpassed the Washington Monumentto become the tallest man-made structure in the world, a title it held for 41 years until the Chrysler Building in New York City was finished in 1930.

The sixth structure is the Louvre, the world's largest art museum and a historic monument in Paris, France. A central landmark of the city, it is located on the Right Bank of the Seine in the city's 1st arrondissement (district or ward). Approximately 38,000 objects from prehistory to the 21st century are exhibited over an area of 72,735 square metres (782,910 square feet). In 2018, the Louvre was the world's most visited art museum, receiving 10.2 million visitors.

Paris is the capital and most populous city of France, with an area of 105 square kilometres (41 square miles) and an official estimated population of 2,140,526 residents as of 1 January 2019. Since the 17th century, Paris has been one of Europe's major centers of finance, commerce, fashion, science, and the arts.

The City of Paris is the centre and seat of government of the Île-de-France, or Paris Region, which has an estimated official 2019 population of 12,213,364, or about 18 percent of the population of France. The larger Paris metropolitan area had a population of 12,532,901 in 2015. The Paris Region had a GDP of €681 billion (US$850 billion) in 2016, accounting for 31 percent of the GDP of France, and was the 5th largest region by GDP in the world. According to the Economist Intelligence Unit Worldwide Cost of Living Survey in 2018, Paris was the second-most expensive city in the world, behind Singapore and ahead of Zurich, Hong Kong, Oslo and Geneva.

The city is a major rail, highway, and air-transport hub served by two international airports: Paris-Charles de Gaulle (the second busiest airport in Europe) and Paris-Orly. Opened in 1900, the city's subway system, the Paris Métro, serves 5.23 million passengers daily, and is the second busiest metro system in Europe after Moscow Metro. Gare du Nord is the 24th busiest railway station in the world, with 262 million passengers in 2015.

Paris is especially known for its museums and architectural landmarks: the Louvre was the most visited art museum in the world in 2018, with 10.2 million visitors. The Musée d'Orsay and Musée de l'Orangerie are noted for their collections of French Impressionist art, and the Pompidou Centre Musée National d'Art Moderne has the largest collection of modern and contemporary art in Europe. The historical district along the Seine in the city centre is classified as a UNESCO Heritage Site. Popular landmarks in the centre of the city include the Cathedral of Notre Dame de Paris and the Gothic royal chapel of Sainte-Chapelle, both on the Île de la Cité; the Eiffel Tower, constructed for the Paris Universal Exposition of 1889; the Grand Palais and Petit Palais, built for the Paris Universal Exposition of 1900; the Arc de Triomphe on the Champs-Élysées, and the Basilica of Sacré-Coeur on the hill of Montmartre. Paris received 23 million visitors in 2017, measured by hotel stays, with the largest numbers of foreign visitors coming from the United States, the UK, Germany and China. It was ranked as the third most visited travel destination in the world in 2017, after Bangkok and London.

The football club Paris Saint-Germain and the rugby union club Stade Français are based in Paris. The 80,000-seat Stade de France, built for the 1998 FIFA World Cup, is located just north of Paris in the neighbouring commune of Saint-Denis. Paris hosts the annual French Open Grand Slam tennis tournament on the red clay of Roland Garros. Paris hosted the Olympic Games in 1900, 1924 and will host the 2024 Summer Olympics. The 1938 and 1998 FIFA World Cups, the 2007 Rugby World Cup, and the 1960, 1984, and 2016 UEFA European Championships were also held in the city and, every July, the Tour de France bicycle race finishes there. 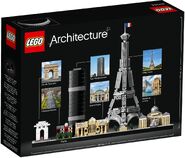 Blueprint
Add a photo to this gallery