Brickipedia
Register
Don't have an account?
Sign In
Advertisement
in: Class 1 articles, Sets listed for ages 12+, 2019 sets,
and 3 more
English

21045 Trafalgar Square is an Architecture set to be released in 2019. It is based on the landmark of the same name in London, England, UK.

The set includes Trafalgar Square, which includes the National Gallery, Nelson's Column, and multiple lions, sculptures, statue plinths, and miniature buses and cabs, as well as a detailed baseplate.

The National Gallery is an art museum in Trafalgar Square in the City of Westminster, in Central London. Founded in 1824, it houses a collection of over 2,300 paintings dating from the mid-13th century to 1900.

The Gallery is an exempt charity, and a non-departmental public body of the Department for Culture, Media and Sport. Its collection belongs to the government on behalf of the British public, and entry to the main collection is free of charge. It is among the most visited art museums in the world, after the Louvre, the British Museum, and the Metropolitan Museum of Art.

Trafalgar Square is a public square in the City of Westminster, Central London, built around the area formerly known as Charing Cross. Its name commemorates the Battle of Trafalgar, a British naval victory in the Napoleonic Wars with France and Spain that took place on 21 October 1805 off the coast of Cape Trafalgar.

The site of Trafalgar Square had been a significant landmark since the 13th century and originally contained the King's Mews. After George IV moved the mews to Buckingham Palace, the area was redeveloped by John Nash, but progress was slow after his death, and the square did not open until 1844. The 169-foot (52 m) Nelson's Column at its centre is guarded by four lion statues. A number of commemorative statues and sculptures occupy the square, but the Fourth Plinth, left empty since 1840, has been host to contemporary art since 1999.

The square has been used for community gatherings and political demonstrations, including Bloody Sunday in 1887, the culmination of the first Aldermaston March, anti-war protests, and campaigns against climate change. A Christmas tree has been donated to the square by Norway since 1947 and is erected for twelve days before and after Christmas Day. The square is a centre of annual celebrations on New Year's Eve. It was well known for its feral pigeons until their removals in the early 21st century. 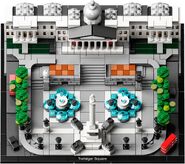 x12px 84.99 € +
Released
August 1, 2019 +
ShopDescription
Capture the essence of a historical London … Capture the essence of a historical London landmark with the LEGO® Architecture 21045 Trafalgar Square set. Named in honor of Lord Horatio Nelson following his 1805 naval victory over Napoleon, the square has since become a popular tourist attraction and preferred location for political and community gatherings. This detailed LEGO interpretation depicts the domed National Gallery complete with columned facade, Nelson's Column flanked by 4 lions, the square's famous fountains and 4 sculpture plinths. The sections at the rear of the National Gallery structure can be removed for access to a detailed interior with brick-built statue and paintings. Tree-lined borders, ornate lampposts, 2 London buses, 2 black cabs and a tiled baseplate depicting the square and surrounding roads complete the model. Finished with a decorative nameplate, this collectible building set delivers a highly satisfying building experience to all with an interest in architecture, travel, history and design, and makes a truly iconic centerpiece for the home or office.</br></br>-LEGO® Architecture interpretation of the real-world London landmark, Trafalgar Square.</br></br>-Features the National Gallery, Nelson’s Column flanked by 4 lions, 2 fountains, 4 sculpture plinths, 10 trees, 6 lampposts, and a tiled baseplate depicting the square and road areas complete with 2 London buses and 2 black cabs.</br></br>-The included booklet contains information about the architecture and history of each structure, as well as historical facts about Trafalgar Square and its architectural heritage. (English language only. Other languages available for download at LEGO.com/architecture).</br></br>-Includes a decorative Trafalgar Square nameplate.</br>LEGO® Architecture celebrates the world of architecture through the medium of the LEGO building brick and is developed for all with an interest in travel, architecture, history and design.</br></br>-This set includes over 1,190 pieces.</br></br>-Enjoy a pleasantly challenging and rewarding building experience with this LEGO® Architecture set.</br></br>-Measures over 4” (12cm) high, 9” (24cm) wide and 7” (20cm) deep.) high, 9” (24cm) wide and 7” (20cm) deep.
Theme
Architecture +
Title
Trafalgar Square +
Type
Set +
USPrice
$79.99 +
Advertisement