Brickipedia
Register
Don't have an account?
Sign In
Advertisement
in: Class 2 articles, Sets listed for ages 16+, 2020 sets,
and 3 more
English

21051 Dubai is an Architecture set that was released in 2020 under the Skyline Series. It is the first Skyline set to be based on the Arab States.

The set includes five structures. From left to right they are the Jumeirah Emirates Towers Hotel, a 56-story hotel that is the world's third tallest all-hotel building. The second building is the Dubai Frame, a massive picture frame in Zabeel Park. The third building is the Burj Khalifa, a massive skyscraper that is the tallest structure in the world. The structure in front of the Burj Khalifa is the Dubai Fountain, a 12 hectare man-made fountain. The final structure is the Burj al-Arab, a luxury hotel on an artificial island that is the seventh tallest hotel in the world.

Dubai is the most populous city in the United Arab Emirates (UAE) and the capital of the Emirate of Dubai.

Located in the eastern part of the Arabian Peninsula on the coast of the Persian Gulf, Dubai aims to be the business hub of Western Asia. It is also a major global transport hub for passengers and cargo. Oil revenue helped accelerate the development of the city, which was already a major mercantile hub. Today, less than 5% of the emirate's revenue comes from oil. A centre for regional and international trade since the early 20th century, Dubai's economy relies on revenues from trade, tourism, aviation, real estate, and financial services. 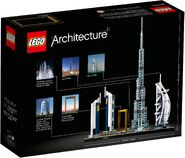 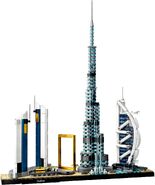 Set overview with pictures of locations