Brickipedia
Register
Don't have an account?
Sign In
Advertisement
in: Class 2 articles, Sets listed for ages 18+, Architecture,
and 2 more
English

The Taj Mahal is an ivory-white marble mausoleum on the right bank of the river Yamuna in the Indian city of Agra. It was commissioned in 1632 by the Mughal emperor Shah Jahan (r. 1628–1658) to house the tomb of his favourite wife, Mumtaz Mahal; it also houses the tomb of Shah Jahan himself. The tomb is the centrepiece of a 17-hectare (42-acre) complex, which includes a mosque and a guest house, and is set in formal gardens bounded on three sides by a crenellated wall.

Construction of the mausoleum was essentially completed in 1643, but work continued on other phases of the project for another 10 years. The Taj Mahal complex is believed to have been completed in its entirety in 1653 at a cost estimated at the time to be around 32 million rupees, which in 2020 would be approximately 70 billion rupees (about U.S. $1 billion). The construction project employed some 20,000 artisans under the guidance of a board of architects led by the court architect to the emperor, Ustad Ahmad Lahauri.

The Taj Mahal was designated as a UNESCO World Heritage Site in 1983 for being "the jewel of Muslim art in India and one of the universally admired masterpieces of the world's heritage". It is regarded by many as the best example of Mughal architecture and a symbol of India's rich history. The Taj Mahal attracts 7–8 million visitors a year and in 2007, it was declared a winner of the New 7 Wonders of the World (2000–2007) initiative. 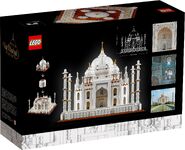 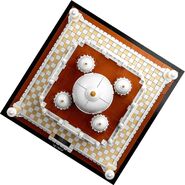 x12px 109.99 € +
Released
June 5, 2021 +
ShopDescription
Whether you have been lucky enough to visi … Whether you have been lucky enough to visit the Taj Mahal yourself and want a special souvenir of the experience, dream of visiting one day or just appreciate elegant buildings, this LEGO® Architecture Landmarks Collection set (21056) is ideal for you.</br></br>Wondrous details</br></br>This inspiring, hands-on challenge to enjoy in your spare time lets you recreate a symbol of eternal love and an architectural wonder of the world in LEGO style. Revel in authentic details such as the crypt with tombs of Mumtaz and Shah Jahan, central chamber with 2 cenotaphs, monumental iwans, main dome, 4 chhatris and 4 slender minarets. A LEGO brick inscribed ‘Taj Mahal’ completes a scale model that is sure to wow people wherever it is displayed.</br></br>Delightful gift</br></br>Part of a collection of premium-quality LEGO model kits for adults, this set makes a fantastic treat for yourself. It also makes an inspirational gift for LEGO fans and anyone in your life who is passionate about the Taj Mahal, India, travel or architecture.</br></br></br></br>* Build and display your own symbol of eternal love with this fabulously detailed LEGO® Architecture Landmarks Collection model (21056) of the Taj Mahal.</br></br></br></br>* The crypt with tombs of Mumtaz and Shah Jahan, central chamber with 2 cenotaphs, iwans, main dome, 4 chhatris, 4 minarets and other authentic details are beautifully recreated in LEGO® style.</br></br></br></br>* The central chamber can be removed to view the crypt below. The scale model also includes a LEGO® brick inscribed ‘Taj Mahal’ to complete a conversation-starting centerpiece.</br></br></br></br>* Whether you’ve been to or dream of visiting India and the Taj Mahal, or you just love travel and architecture, this building set is for you. It also makes a very special gift for creative friends.</br></br></br></br>* Measuring 7.5 in. (20 cm) high, 9 in (23 cm) wide and 9 in. (23 cm) deep, this buildable architectural model makes an impressive display piece for your home or office.</br></br></br></br>* This collectible, 2,022-piece, construction set is all about the pleasure of immersing yourself in a complex build that leaves you feeling relaxed, refreshed and with a real sense of achievement.</br></br></br></br>* Includes step-by-step instructions so even LEGO® beginners can build confidently, plus a booklet telling the Taj Mahal story (English language only. Download other languages at LEGO.com/architecture).</br></br></br></br>* This LEGO® Architecture Taj Mahal set is part of a collection of premium-quality building kits designed for adults like you who enjoy hands-on, creative projects.</br></br></br></br>* LEGO® components meet rigorous industry standards to ensure that they connect securely and strongly.</br></br></br></br>* LEGO® bricks and pieces are dropped, heated, crushed, twisted and analyzed to make sure that they satisfy stringent global safety standards.satisfy stringent global safety standards.
Theme
Architecture +
Title
Taj Mahal +
Type
Set +
USPrice
$119.99 +
Advertisement