21102 Micro World is a CUUSOO set, based on the popular video game "Minecraft", released on June 1, 2012. It was unveiled at LEGO World Copenhagen 2012, on February 15.[1] It includes two Micro Mobs: Steve and a Creeper, and four modular 6x6 stud sections of land, with under and above ground details.

The set consists of four modular sections of land, which can be arranged in any order. All the sections have light grey and dark grey lower sections, often with cave detailing and caves that can be viewed when opened up or arranged differently than usual. The upper areas are built on a layer of light grey, followed by a layer of brown, followed by the features of the layer itself.
One of the four sections features a large log cabin, made of brown plates with transparent clear ones for windows. The house has a completely flat top, and is surrounded by some low scrub and rocks. A tan path runs in front of it. Under the ground, this section features a cave filled with a lake.
The second of the four sections features a continuation of the path seen on the previous section, as well as a single tree, and some very low hills. It features a dry, rocky cave under its surface.
The third section features a river, a tree surrounded by rocks, and a large hill. Underneath the surface, there is some free ground on the bottom plate, as the upper ground slopes outward, creating a small empty area at the bottom.
The fourth section features a mountain with lava flowing down its slope like a river, as well as a very small hill. Beneath the surface is an empty cave.

This set is based on an unspecified Overworld, which is the first Minecraft world players start the game in. 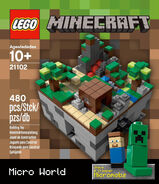 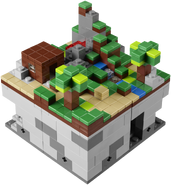 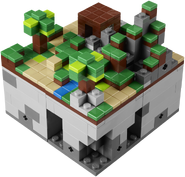 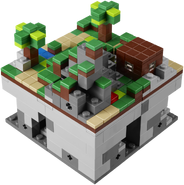 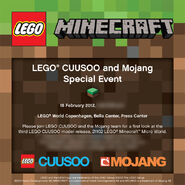 A preview of the set before it was revealed

The site where you can pre-order the set

Advertisement for the set 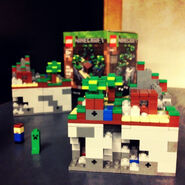 The set on display at LEGO World Copenhagen 2012

The set's announcement on CUUSOO

Several of the set's boxes 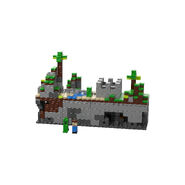 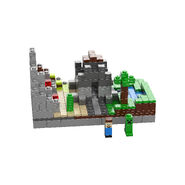 Retrieved from "https://brickipedia.fandom.com/wiki/21102_Micro_World?oldid=1614780"
Community content is available under CC-BY-SA unless otherwise noted.