Brickipedia
Register
Don't have an account?
Sign In
Advertisement
in: Class 3 articles, Sets listed for ages 10+, 20000 sets,
and 3 more
English

21107 The End is a Minecraft set released in June 2014. It is the fourth Minecraft set to be released. It includes four Endermen Micro Mobs and the Ender Dragon.

The set depicts The End, a dimension in Minecraft, and features all the recognizable things about the end: It is made in a tan colour, reminiscent of End Stone, contains several tall pillars with Ender Crystals atop them, contains the Ender Dragon, and the return portal with a stud representing the Dragon Egg the player receives once the Ender Dragon is defeated.

The designer Steen with the set 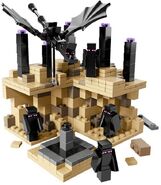 $69.99 +
Released
June 1, 2014 +
ShopDescription
Enter The End dimension and slay the En … Enter The End dimension and slay the Ender Dragon!</br></br>Venture through the End Portal and reach The End dimension, then let destiny take its course! This desolate world floats in the void under starless skies and is inhabited by the Ender Dragon and countless Endermen, who thrive in the bleakness of this dayless dimension. The powerful Ender Dragon hovers ominously over Obsidian pillars bearing the regenerative Ender Crystals that are vital to its survival. Includes the fearsome Ender Dragon and 4 Endermen Micromob figures. Prepare for battle!</br> </br>*Includes the Ender Dragon and 4 Enderman Micromob figures</br>*Recreate a Minecraft world as a micro-scale LEGO® model</br>*Experience The End, a new biome in the LEGO® Minecraft micro-world</br>*Split the model into 4 sections for a new play experience </br>*Destroy the Ender Crystals!</br>*Slay the fearsome Ender Dragon!</br>*Combine this biome with others in the same series to build your own LEGO® Minecraft world</br>*Measures 3” (10cm) high, 3” (10cm) wide and 3” (10cm) deepm) high, 3” (10cm) wide and 3” (10cm) deep +
Theme
Minecraft +
Title
The End +
Txt1
Ender Dragon +
Txt2
Enderman (x4) +
Type
Set +
USPrice
$34.99 +
Advertisement