Brickipedia
Register
Don't have an account?
Sign In
Advertisement
in: Class 2 articles, Sets listed for ages 10+, 20000 sets,
and 5 more
English

Ghostbusters Ecto-1 is a LEGO Ideas set that was released on June 1, 2014. In 2015, LEGO released a follow-up set: 75827 Ghostbusters Firehouse Headquarters.

The Ecto-1 was the vehicle that the Ghostbusters used to travel throughout New York City busting ghosts and other entities.

The vehicle used for the Ecto-1 was a 1959 Cadillac professional chassis, built by the Miller-Meteor company. The ambulance/hearse combination was the end loader variety. Dr. Ray Stantz found the vehicle shortly after he mortgaged his mother's house to buy the Firehouse. Because of his mechanical skills, he was able to repair the vehicle, which he acquired for $4,800. The vehicle had enough room in it to store Proton Packs for all of the crew, along with Ecto Goggles, P.K.E. Meters, and a slew of Traps. 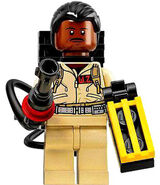 Rear view of the set