A raid is an event in which waves of various mobs, mainly illagers and Pillagers, spawn and attack a village. It is triggered when a player with the Bad Omen status effect enters a village. A player with the Bad Omen status effect triggers a raid upon entering a chunk with at least one villager and a claimed bed, or one of the 8 chunks surrounding it in a square. Bad Omen is obtained when a player kills an illager captain, which can be found at pillager outposts, woodland mansions or in patrols.

When a player with Bad Omen effect enters a 3x3x3 subchunk region around a village center, the effect disappears and the raid starts. The raid center is set as the average of the coordinates of all the claimed points-of-interest in the village within a 64 block radius (spherical) of the player at the time the raid is triggered. A boss bar labeled "Raid" appears and begins charging. The bossbar is visible to players up to 96 blocks away (spherical) from raid center. A player does not receive the Bad Omen effect when killing the patrol captain within a village. The captain is always a vindicator upon spawning, if possible.

The raid spawns several waves of raider mobs. To find a valid spawn target location at the beginning of each raid wave, there are 3 spawn attempt phases with 20 attempts per phase. For each attempt, a random location is chosen a certain radius away from the raid center (64 block radius in 1st phase, 32 in 2nd, and 0 in 3rd) at a random horizontal angle, with fractional results rounded down. Additionally, a random 0-4 is added to x and z coordinates. In effect, the three spawn attempt areas are two rings and a 5x5 square. The target height is always on top of the topmost non-air block. For spawn location to be valid, the block underneath must have a solid opaque top face or be snow. Valid blocks include full blocks, upside-down slabs/stairs, soul sand, and packed/blue ice, but not glass, leaves, light-emitting blocks, trapdoors, regular ice, or carpet. If no valid location is found three times, the raid ends. 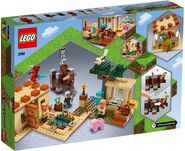