Brickipedia
Register
Don't have an account?
Sign In
Advertisement
in: Class 4 articles, Sets listed for ages 12+, 20000 sets,
and 6 more
English

21303 WALL•E is the 12th LEGO Ideas set and was based upon the popular American computer-animated science-fiction comedy film of the same name produced by Pixar Animation Studios. It includes a 7″ model of the WALL-E trash compactor robot.

The title robot from Pixar's WALL•E. 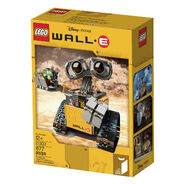 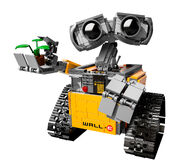 The model of the WALL-E robot

x12px $109.99 +
Released
September 24, 2015 +
ShopDescription
Build, display and role play with WALL-E! … Build, display and role play with WALL-E!</br></br>Construct the LEGO Ideas version of WALL-E with posable neck, adjustable head and arms, gripping hands, opening trunk and rolling tracks. Build a beautifully detailed LEGO version of WALL-E -the last robot left on Earth! Created by Angus MacLane, an animator and director at Pixar Animation Studios, and selected by LEGO Ideas members, the development of this model began alongside the making of the lovable animated character for the classic Pixar feature film. It has taken almost a decade to perfect the LEGO version, which incorporates many authentic WALL-E characteristics, including a posable neck, adjustable head, arms that move up and down and side to side, plus gripping hands and rolling tracks. With a trunk that opens and closes, you can tidy up the planet one pile of garbage at a time! This set also includes a booklet about the designer and the animated Pixar movie.</br></br>* Move the arms up and down and side to side</br>* Open and close the trunk</br>* Includes a booklet about the designer and the animated Pixar movie</br>* The perfect gift for LEGO and WALL-E fans of all ages</br>* Measures over 7″ (18cm) high, 6″ (16cm) long and 6″ (16cm) widem) high, 6″ (16cm) long and 6″ (16cm) wide +
Theme
LEGO Ideas +
Title
WALL•E +
Type
Set +
USPrice
$59.99 +
Advertisement