21308 Adventure Time is a set based on the popular Cartoon Network series with the same name that was released in December 2016. This is the 16th set in the LEGO Ideas theme and the original idea was created by LEGO Ideas user aBetterMonkey. The set has 8 build-able characters from the show, Finn the Human with his original sword, Jake the Dog, Princess Bubblegum, Marceline the Vampire Queen with her axe guitar, Lady Rainicorn, BMO with a pair of joysticks, Ice King with his ice ninja throwing stars, and Gunter the penguin. 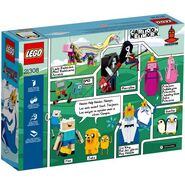 The box art
Add a photo to this gallery