The Flintstones is an American animated sitcom produced by Hanna-Barbera for ABC. The series takes place in a romanticized Stone Age setting, and follows the activities of the titular family, the Flintstones, and their next-door neighbors, the Rubbles (who are their best friends). It was originally broadcast from September 30, 1960, until April 1, 1966, in a prime time slot, the first such instance for an animated series.

The continuing popularity of The Flintstones rested heavily on its juxtaposition of modern everyday concerns in the Stone Age setting. The Flintstones was the most financially successful and longest-running network animated franchise for three decades, until The Simpsons debuted in late 1989. In 2013, TV Guide ranked The Flintstones the second-greatest TV cartoon of all time (after The Simpsons).

The show is set in a comical, satirical version of the Stone Age which, although it uses primitive technology, resembles mid-20th-century suburban America. The plots deliberately resemble the sitcoms of the era, with the caveman Flintstone and Rubble families getting into minor conflicts characteristic of modern life. The show is set in the Stone Age town of Bedrock (pop. 2500). In this fantasy version of the past, dinosaurs and other long-extinct animals co-exist with cavemen, saber-toothed cats, and woolly mammoths.

Animation historian Christopher P. Lehman considers that the series draws its humor in part from creative uses of anachronisms. The main one is the placing of a "modern", 20th-century society in prehistory. This society takes inspiration from the suburban sprawl developed in the first two decades of the postwar period. This society has modern home appliances, but they work by employing animals. They have automobiles, but they hardly resemble the cars of the 20th century. These cars are large wooden and rock structures and burn no fuel. They are powered by people who run while inside them. Finally, the stone houses of this society are cookie-cutter homes positioned into neighborhoods typical of mid-20th-century American suburbs. 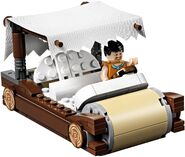 Retrieved from "https://brickipedia.fandom.com/wiki/21316_The_Flintstones?oldid=1973860"
Community content is available under CC-BY-SA unless otherwise noted.