Brickipedia
Register
Don't have an account?
Sign In
Advertisement
in: Class 3 articles, Sets listed for ages 16+, 2019 sets,
and 3 more
English

Friends is an American television sitcom, created by David Crane and Marta Kauffman, which aired on NBC from September 22, 1994, to May 6, 2004, lasting ten seasons. With an ensemble cast starring Jennifer Aniston, Courteney Cox, Lisa Kudrow, Matt LeBlanc, Matthew Perry, and David Schwimmer, the show revolves around six friends in their 20s and 30s who live in Manhattan, New York City. The series was produced by Bright/Kauffman/Crane Productions, in association with Warner Bros. Television. The original executive producers were Kevin S. Bright, Kauffman, and Crane.

Kauffman and Crane began developing Friends under the title Insomnia Café between November and December 1993. They presented the idea to Bright, and together they pitched a seven-page treatment of the show to NBC. After several script rewrites and changes, including title changes to Six of One and Friends Like Us, the series was finally named Friends.

Filming of the show took place at Warner Bros. Studios in Burbank, California. All 10 seasons of Friends ranked within the top ten of the final television season ratings; it ultimately reached the number-one spot in its eighth season. The series finale aired on May 6, 2004, and was watched by around 52.5 million American viewers, making it the fifth most-watched series finale in television history, and the most-watched television episode of the 2000s decade. 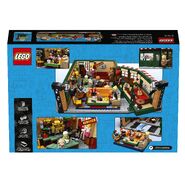