21322 Pirates of Barracuda Bay is a LEGO Ideas set that was released on April 1, 2020. The set is a redesigned and updated form of the 1989 set, 6285 Black Seas Barracuda, as well as the 30th LEGO Ideas project to be produced as a set. It includes a pirate headquarters that can be rebuilt into The Black Seas Barracuda, 10 Minifigures and 2545 pieces. The set was only sold on LEGO.com.

“Welcome to the impregnable pirate fortress, house of Red beard, many sailors fear these waters, the most dangerous pirates make their stop here. Be careful not to be locked in jail or possibly the only place you can be, as long as you do not find the secret exit.”
―Idea's Submission Description by Bricky_Brick

This set was designed by LEGO Ideas member Pablo Jiménez who goes by the ID Bricky_Blocks. On his submission he wrote of his love for classic themes like Pirates and how that inspired him to create this model. On March 3rd , 2019 the submission was given the 10,000 votes needed to become a part of the review process. On September 26th, 2019 LEGO officially announced that the Pirate's Bay would be the 30th LEGO IDEAS set. The set was officially revealed on March 24th, 2020

The submission model was a modular pirate fortress based inside of crashed pirate ship. It featured multiple lookout decks, rooms for the pirates, hidden treasure, and a canteen. Unlike the finalized set, this model was not designed to be rebuilt into a finished pirate ship. The submission included 7 minifigures, 1 monkey, 1 scorpion, 3 crabs, 3 hens, two pigs, 3 parrots, a shark, and a dog.

The official model was designed by Milan Madge and Austin William Carlson. The finalized model varies significantly from the concept model. Originally, this set was a pirate outpost that while still featuring ship detailing kept these details fairly minimal. It had a Reddish Brown and Green color scheme which was much simpler than that used in the final model.

The final model deals heavily with the shipwreck aspect and uses this in order to incorporate the alternate build.

The design of the box art is inspired by the box art for 6285 Black Seas Barracuda. Many elements such as the dusk sky, palm trees, and yellow "LEGOLAND" banner are carried over to the newer box design.

21322 Pirates of Barracuda Bay contains 2545 pieces, many of which go into the removable ship sections. Each section is loosely joined to the island and can be easily removed. The island features a statue head that appears similar to the one featured in 6262 King Kahuka's Throne.

A majority of the pieces of this set go into the construction of the Black Seas Barracuda. The sections of the ship can easily be detached from the Barracuda bay build. However, not all pieces needed for the ship build are used in the initial Barracuda Bay Build. Two of the sails, as well as the parts to connect the sails are extra parts from the initial island build. 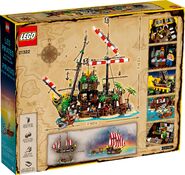 The sections which make up The Black Seas Barracuda

The Island section with no ship present

The back of the island Build

The ship separated from the island build