Brickipedia
Register
Don't have an account?
Sign In
Advertisement
in: Class 2 articles, Sets listed for ages 18+, Ideas,
and 4 more
English

The Fender Stratocaster, colloquially known as the Strat, is a model of electric guitar designed from 1952 into 1954 by Leo Fender, Bill Carson, George Fullerton and Freddie Tavares. The Fender Musical Instruments Corporation has continuously manufactured the Stratocaster since 1954. It is a double-cutaway guitar, with an extended top "horn" shape for balance. Along with the Gibson Les Paul, Gibson SG and Fender Telecaster, it is one of the most-often emulated electric guitar shapes. "Stratocaster" and "Strat" are trademark terms belonging to Fender. Guitars that duplicate the Stratocaster by other manufacturers are sometimes called S-Type or ST-type guitars.

The guitar introduced into the popular market several features that were innovative for electric guitars in the mid 1950s. The distinctive body shape, which has become commonplace among electric guitars, was revolutionary for the time period, and for the first time a mass-market electric guitar did not significantly resemble earlier acoustic models. The double cutaway, elongated horns, and heavily contoured back were all designed for better balance and comfort to play while standing up and slung off the shoulder with a strap. The three-pickup design offered players increased versatility and choice in tone quality over earlier one- and two-pickup electric guitars, and a responsive and simplified vibrato arm integrated into the bridge plate, which marked a significant design improvement over other vibrato systems, such as those manufactured by Bigsby. All of these design elements were popularized and later became an industry standard due to the success of the Stratocaster.

Over the years, countless variations of the Stratocaster have been made. The modular nature of the guitar, with its easily removable components, left players and luthiers to perform numerous modifications to their own guitars, changing out pickups or necks to fit the needs of the player. Fender has released numerous models with different pickup configurations, and has made other small modifications to the electronics and components of the base model, such as changing the initial 3-position selector switch to a standard 5-position selector switch, offering more tonal variety, as well as other small cosmetic changes to things like tuning pegs and types of woods used in various parts of the guitar. Various other companies have produced their own Strat-style bodies known as Superstrats. 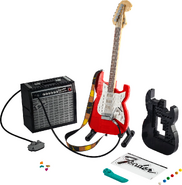 Bottom of the guitar 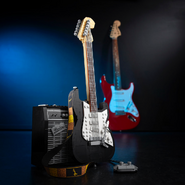 The Submission on LEGO Ideas