Brickipedia
Register
Don't have an account?
Sign In
Advertisement
in: Class 2 articles, Sets listed for ages 6-16, 2011 sets,
and 2 more
English

Rocka wears gold and black armor, and his weapon is a complex 'hand' sporting two blades and two claws. His head and core are white, and his transparent green badge is on his left forearm. Rocka's one hand is black, corresponding to the colour of his thigh armour and the armour on his right arm. His helmet is shaped like a lion head, and he is the tallest hero of the 3.0 series.[1] His specialities are speed, strength, and ferocity.

Sent by the Hero Factory to assist Aldous Witch on the mining planet of Quatros, Rocka called for the Alpha 1 Team's backup when faced by Aldous, now transformed into the evil Witch Doctor and enslaving the creatures. Later, he received an XL upgrade that enabled him to defeat Aldous Witch. 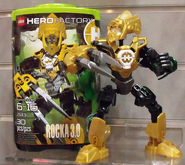 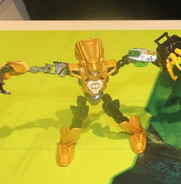 A photograph of the Stormer+Rocka combiner set

Atte … Save Quatros from destruction!</br></br>Attention, Rocka! We’ve received a red alert on jungle planet Quatros. Witch Doctor is trying to remove all of the planet’s Quaza. If he succeeds, the planet will die. Stop him before it’s too late! Quatros is crawling with beasts under his control. Use the double claw combo tool and lion animal power to ward them off.</br></br>* Includes double claw combo tool and lion animal power</br>* Includes white hero core on a chest</br>* Rocka’s specialties are speed, strength, ferocity</br>* Stands over 6” (17cm) tallgth, ferocity