2145 Stormer 3.0 is a Hero Factory set that was released in July 2011. The set includes a white hero, Preston Stormer's 3.0 form, which is the third version of the original Preston Stormer.

Stormer 3.0 wields a modified version of his trademark multifunctional ice weapon on Quatros, the Savage Planet. It sports two blue spikes and a dark silver 'villain core' piece. His helmet is shaped like a rhino's head, and all of his armour pieces but one are white. The exception is the transparent green armour badge that all 3.0 Heroes have. On his left arm, he has a body armour piece with a blue spike, similar to Stringer 3.0's. His body armour piece is dark silver, the chest armour white, and his core is the same blue as his head.

Stormer is the leader of the Alpha 1 team, and the main enemy of both Witch Doctor and Von Nebula, as the top-ranking Hero in all of Hero Factory. He is dedicated, loyal and no-nonsense, and seems harsh and strict to rookies.

A photograph of the Stormer and Rocka combiner set 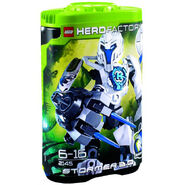